Angelique Bamberg is an independent consultant specializing in city planning and historic preservation and an instructor in the Department of the History of Art and Architecture at the University of Pittsburgh. 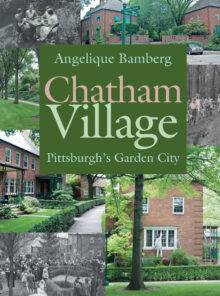 Chatham Village, located in the heart of Pittsburgh, is an urban oasis that combines Georgian colonial revival architecture with generous greenspaces, recreation facilities, surrounding woodlands, and many other elements that make living there a unique experience. Founded in 1932, it has gained international recognition as an outstanding example of the American Garden City planning movement and was named a National Historic Landmark in 2005.

Chatham Village was the brainchild of Charles F. Lewis, then director of the Buhl Foundation, a Pittsburgh-based charitable trust. Lewis sought an alternative to the substandard housing that plagued low-income families in the city. He hired the New York&ndash;based team of Clarence S. Stein and Henry Wright, followers of Ebenezer HowardÆs utopian Garden City movement, which sought to combine the best of urban and suburban living environments by connecting individuals to each other and to nature.

Angelique Bamberg provides the first book-length study of Chatham Village, in which she establishes its historical significance to urban planning and reveals the complex development process, social significance, and breakthrough construction and landscaping techniques that shaped this idyllic community. She also relates the design of Chatham Village to the work of other pioneers in urban planning, including Frederick Law Olmsted Sr., landscape architect John Nolen, and the Regional Planning Association of America, and considers the different ways that Chatham Village and the later New Urbanist movement address a common set of issues. Above all, Bamberg finds that Chatham VillageÆs continued viability and vibrance confirms its distinction as a model for planned housing and urban-based community living.