Charles H. McCormick is professor emeritus of history at Fairmont State College. He is the author of Leisler’s Rebellion, 1689-1691, and This Nest of Vipers: McCarthyism and Higher Education in West Virginia, 1951-1952. 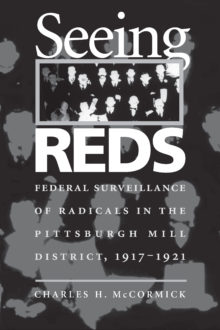 Federal Surveillance of Radicals in the Pittsburgh Mill District, 1917–1921

During World War I, fear that a network of German spies was operating on American soil justified the rapid growth of federal intelligence agencies. When that threat proved illusory, these agencies, staffed heavily by corporate managers and anti-union private detectives, targeted antiwar and radical labor groups, particularly the Socialist party and the Industrial Workers of the World.

Seeing Reds, based largely on case files from the Bureau of Investigation, Military Intelligence Division, and Office of Naval Intelligence, describes this formative period of federal domestic spying in the Pittsburgh region. McCormick traces the activities of L. M. Wendell, a Bureau of Investigation “special employee” who infiltrated the IWW’s Pittsburgh recruiting branch and the inner circle of anarchist agitator and lawyer Jacob Margolis. Wendell and other Pittsbugh based agents spied on radical organizations from Erie, Pennsylvania, to Camp Lee, Virginia, intervened in the steel and coal strikes of 1919, and carried out the Palmer raids aimed at mass deportation of members of the Union of Russian Workers and the New Communist Party.

McCormick’s detailed history uses extensive research to add to our understanding of the security state, cold war ideology, labor and immigration history, and the rise of the authoritarian American Left, as well as the career paths of figures as diverse as J. Edgar Hoover and William Z. Foster.