Constance B. Schulz, professor of history and director of the Public History Program at the University of South Carolina, is author and editor of several works on documentary photography, most recently, Bust to Boom: Documentary Photographs of Kansas, 1936–1949. 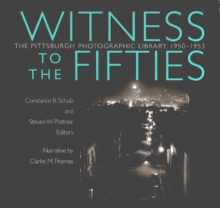 Witness to the Fifties

Initially commissioned to record the progress of Pittsburgh’s Renaissance I, these unforgettable black-and-white photographs of Roy Stryker’s Pittsburgh Photographic Library (PPL) capture the city in a state of flux. They reveal a union of opposites—the suited wonderment of the downtown businessman with the easy grace and competence of a shirtless construction worker balanced high over his head; the anonymity and isolation of planned housing with the belief in expansion and renewal; the energy and excitement of a city on the move with the traditions of the established elite; the juxtaposition between the growing optimism about the ability of technology to improve our lives; and the traditional steel and other heavy smokestack industries that still dominated the region. The Renaissance was seen as a way for Pittsburgh to keep abreast of modern urban life and to preserve its economic position, but the rapid development of a white suburban middle class was sapping the very essence of the personalized downtown neighborhoods. These photographers have captured the convergence of destruction and rejuvenation that is the essence of an urban renaissance—all the anxiety and hope of the decade is reflected in these poignant photographs.
Constance Schulz’s fascinating essay on the story of the PPL, in order to present a full picture of the political and civic goals, achievements, and failings of the project, provides a thorough discussion of the background of the Pittsburgh Photographic Library, putting into perspective the Allegheny Conference’s purpose for initiating the PPL, Roy Stryker’s own vision and work, as well as those of the photographers who worked for Stryker on the project, and the politics that undermined the full implementation of it. Clark M. Thomas’s accompanying narrative offers an eclectic range of facts and fascinating bits of the city’s history and neighborhood lore, as well as noting important political and economic episodes. It also provides a glimpse into the often underrepresented lives of minorities and women in the region’s development. Anyone moved by the incredible social upheaval and expansion that occurred in cities across the nation in the 1950s following years of depression and war will want to have this collection.