David Shumate is the author of The Floating Bridge and High Water Mark, winner of the 2003 Agnes Lynch Starrett Poetry Prize. His poetry has appeared widely in literary journals and has been anthologized in Good Poems for Hard Times, The Best American Poetry and The Writer’s Almanac. Shumate is poet-in-residence at Marian University and lives in Zionsville, Indiana. 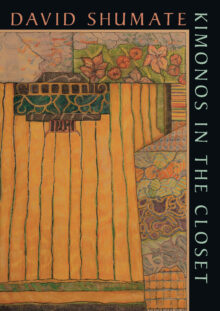 Kimonos in the Closet

“These are enormously arresting, odd, wryly humorous, gripping poems. And the variety of subject matter is astounding. I don’t know when I’ve enjoyed reading a book so much.”—David Budbill 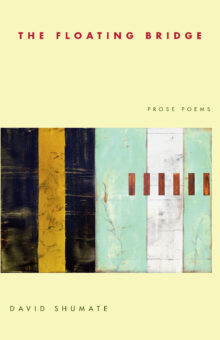 The Floating Bridge, David Shumate’s second collection of prose poems, transports its readers over the chasm between the mundane and the enchanted. We traverse one bridge and find ourselves eavesdropping on Gertrude Stein and her gardener. We take the night bus to Gomorrah to have a look around. Halfway across, each bridge vanishes beneath our feet. Our world shifts. The commonplace begins to glow. We turn the page. Another bridge awaits. 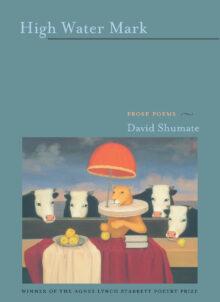 Everyday mindreading, a house full of Buddhas, and the papaya scent of the soul. An interview with Custer at a place of his choosing, “probably a steakhouse.” The ability of dogs to smell the uncool.

Hitler's barber imagines what might have been if only he'd leaned his weight into the razor. An oblivious Coronado narrowly avoids an ambush on the American plains. Freud lecherously lifts the skirt of a Mexican housekeeper who has far too much work to be bothered by “a pillar of modern thought. Or just some dirty old man.”

In lesser hands such disparate elements might fly wildly out of control. But in David Shumate's understated, brilliant prose poems, they come together in miraculously vivid riffs.

The narrator of the title poem rhapsodizes, “I wouldn't mind seeing another good flood before I die. It's been dry for decades. Next time I think I'll just let go and drift downstream and see where I end up.” Shumate's deft and refreshing collection takes us to amazing places with its plainspoken meditations.