Dianne Harris is dean of the College of Arts & Sciences at the University of Washington. From 2017–2021 she was a senior program officer at the Andrew W. Mellon Foundation. Prior to that she served as dean of the College of Humanities and as professor of history at the University of Utah. Among her most recent publications are Second Suburb: Levittown, Pennsylvania and Little White Houses: How the Postwar Home Constructed Race in America. She is also editor of the book series Culture, Politics, and the Built Environment. 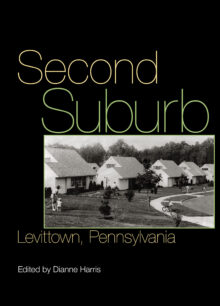 Carved from eight square miles of Bucks County farmland northeast of Philadelphia, Levittown, Pennsylvania, is a symbol of postwar suburbia and the fulfillment of the American dream. Begun in 1952, after the completion of an identically named community on Long Island, the second Levittown soon eclipsed its New York counterpart in scale and ambition, yet it continues to live in the shadow of its better-known sister and has received limited scholarly attention. Second Suburb uncovers the unique story of Levittown, Pennsylvania, and its significance to American social, architectural, environmental, and political history.

The volume offers a fascinating profile of this planned community in two parts. The first examines Levittown from the inside, including oral histories of residents recalling how Levittown shaped their lives. One such reminiscence is by Daisy Myers, whose family were the first African Americans to move to the community, only to become the targets of a race riot that would receive international publicity. The book also includes selections from the syndicated comic strip Zippy the Pinhead, in which Bill Griffith reflects on the angst-ridden trials of growing up in a Levittown, and an extensive photo essay of neighborhood homes, schools, churches, parks, and swimming pools, collected by Dianne Harris.

The second part of the book views Levittown from the outside. Contributors consider the community’s place in planning and architectural history and the Levitts’ strategies for the mass production of housing. Other chapters address the class stratification of neighborhood sections through price structuring; individual attempts to personalize a home’s form and space as a representation of class and identity; the builders’ focus on the kitchen as the centerpiece of the home and its greatest selling point; the community’s environmental and ecological legacy; racist and exclusionary sales policies; resident activism during the gas riots of 1979; and “America’s lost Eden.”

Bringing together some of the top scholars in architectural history, American studies, and landscape studies, Second Suburb explores the surprisingly rich interplay of design, technology, and social response that marks the emergence and maturation of an exceptionally potent rendition of the American Dream. 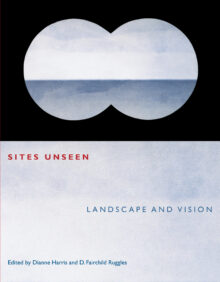 Sites Unseen challenges conventions for viewing and interpreting the landscape, using visual theory to move beyond traditional practices of describing and classifying objects to explore notions of audience and context. While other fields, such as art history and geography, have engaged poststructuralist theory to consider vision and representation, the application of such inquiry to the natural or built environment has lagged behind. This book, by treating landscape as a spatial, psychological, and sensory encounter, aims to bridge this gap, opening a new dialogue for discussing the landscape outside the boundaries of current art criticism and theory.

As the contributors reveal, the landscape is a widely adaptable medium that can be employed literally or metaphorically to convey personal or institutional ideologies. Walls, gates, churchyards, and arches become framing devices for a staged aesthetic experience or to suit a sociopolitical agenda. The optic stimulation of signs, symbols, bodies, and objects combines with physical acts of climbing and walking and sensory acts of touching, smelling, and hearing to evoke an overall “vision” of landscape.

Sites Unseen considers a variety of different perspectives, including ancient Roman visions of landscape, the framing techniques of a Moghul palace, and a contemporary case study of Christo's The Gates, as examples of human attempts to shape our sensory, cognitive, and emotional experiences in the landscape.