Edith Pearlman is the author of three other short story collections: Love Among the Greats, winner of the Spokane Prize for Short Fiction; How to Fall, winner of the Mary McCarthy Prize in Short Fiction; and Binocular Vision. Her stories have twice won the O’Henry Prize and the PEN Syndicated Fiction Award. 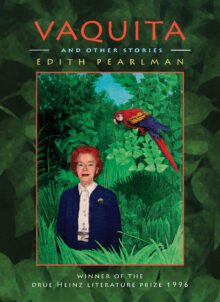 Vaquita and Other Stories

When asked to describe her short stories, Edith Pearlman replied that they are stories about people in peculiar circumstances aching to Do The Right Thing. She elaborated with the same wit and intimacy that make her stories a delight to read:

“Before I was a writer I was a reader; and reading remains a necessary activity, occupying several joyous hours of every day. I like novels, essays, and biographies; but most of all I like the short story: narrative at its most confiding.

“My own work, and particularly the stories in Vaquita, aims at a similar intimacy between writer and reader. My imagined reader wants to know who loves whom, who drinks what, and, mostly, who answers to what summons. Thank Heavens for Spike Lee! Before his movies writers and critics had to natter about moral stances; now I can say with a more tripping tongue that my characters are people in peculiar circumstances, aching to Do The Right Thing if only they can figure out what The Right Thing is. If not, they’ll at least Do Their Own Right Thing Right.

“And I’m drawn to heat: sweltering Central American cities; a steamy soup kitchen; Jerusalem in midsummer; the rekindled passion of an old historian; the steady fire of terminal pain. I like solitaires, oddities, charlatans, and children. My characters are secretive; in almost every story somebody harbors a hidden love, dread, regret, or the memory of an insult awaiting revenge.

“When I stop writing stories I plan to write letters, short and then shorter. My mother could put three sentences onto a postcard and make the recipient think he’d read a novel. I’m working towards a similar compression.”