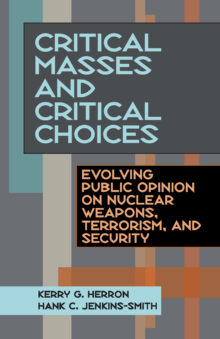 Critical Masses and Critical Choices examines American attitudes on issues of national and international security. Based on over 13,000 in-depth interviews conducted over a ten-year period, Kerry Herron and Hank Jenkins-Smith have created a unique and rich set of data providing insights into public opinion on nuclear deterrence, terrorism, and other security issues from the end of the Cold War to the present day. Their goal is to shed light not only on changes in public opinion about a range of security-related policy issues, but also to gauge the depth of the public&rsquo;s actual understanding of these matters. Prior to this study, the predominant view held that the American people were incapable of articulate and consistent thought on complex political subjects. This book overturns that notion and demonstrates the sometimes surprisingly cogent positions held by ordinary members of the public on intricate national issues.
The book&rsquo;s solid data, based on long-term studies, combined with crisp writing and often startling conclusions, will appeal to a wide range of readers: scholars, journalists, and policy makers. Critical Masses and Critical Choices is the definitive account of the change in public perceptions on security threats and reactive strategies from the early 1990s to the post 9/11 period. This broad and highly original study will prove an indispensable tool for policy makers and scholars alike.