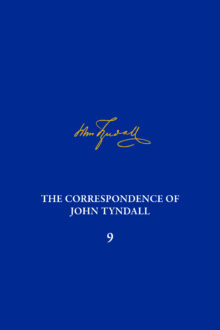 The Correspondence of John Tyndall, Volume 9

This ninth volume of the Tyndall correspondence contains 314 letters. Tyndall was by now in his mid-forties and in the prime of life. His career as a man of science was firmly established and flourishing. He had been professor of natural philosophy at the Royal Institution for more than a dozen years. He had established himself as Michael Faraday’s successor, and during the intervening years had taken on an increasing number of Faraday’s wide range of duties. This volume also covers the period of Faraday’s increasing illness and withdrawal from public life, which had a significant impact on Tyndall both personally and in terms of his standing in the scientific world. Since Tyndall’s appointment at the RI in 1853, Faraday had been a mentor and a close personal friend. Despite their difference in age, politics, religion, and science, the two men clearly held each other in great affection. Correspondence between them is few in number in this volume, but letters from Tyndall to Faraday’s niece Jane Barnard make the affection clear.