Jacqueline Jones Royster is former Ivan Allen Jr. Chair in Liberal Arts and Technology and dean of the Ivan Allen College of Liberal Arts at the Georgia Institute of Technology and professor emerita at both The Ohio State University and Georgia Tech. Her research focuses on the intersections of the history of rhetoric, feminist studies, and cultural studies, with interests in the connections between human and civil rights, as well as in the digital humanities. She is the author of Traces of a Stream: Literacy and Social Change among African American Women and Southern Horrors and Other Writings: The Anti-lynching Campaign of Ida B. Wells-Barnett, among other titles. 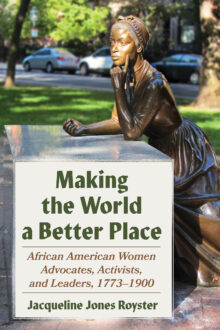 Making the World a Better Place

In Making the World a Better Place, Royster argues that African American women must be taken seriously as historical actors who were more consistently and more variously engaged in community- and nation-building than they have been given credit for. Their considerable rhetorical expertise becomes evident when looking carefully at their work in terms of identity, agency, authority, and expressiveness. Their writings constitute a substantial artifactual record of their levels of engagement, their excellence in sociopolitical work, and the legacies of leadership and action. The writing of African American women during the nineteenth century reflects their own perceptions of the ways and means of their lives. They deserve to be recognized as consequential contributors to the narratives of the nation, rather than marginalized as a group. To that end, Jacqueline Jones Royster offers a deeper understanding, often through their own words, of these women, their practices, and their achievements. 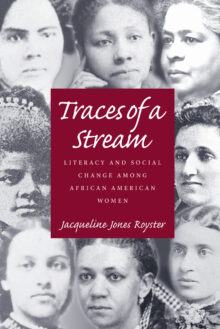 Traces Of A Stream

In her study, Royster acknowledges the persistence of disempowering forces in the lives of African American women and their equal perseverance against these forces. Amid these conditions, Royster views the acquisition of literacy as a dynamic moment for African American women, not only in terms of their use of written language to satisfy their general needs for agency and authority, but also to fulfill socio-political purposes as well.

Traces of a Stream is a showcase for nineteenth-century African American women, and particularly elite women, as a group of writers who are currently underrepresented in rhetorical scholarship. Royster has formulated both an analytical theory and an ideological perspective that are useful in gaining a more generative understanding of literate practices as a whole and the practices of African American women in particular. Royster tells a tale of rhetorical prowess, calling for alternative ways of seeing, reading, and rendering scholarship as she seeks to establish a more suitable place for the contributions and achievements of African American women writers.