Janet Carey Eldred is professor of English, affiliate faculty in the Department of Gender and Women’s Studies, and the founding director of the Writing Initiative Studio in Engineering (WISE) at the University of Kentucky. She is the author of Sentimental Attachments: Essays, Creative Nonfiction, and Other Experiments in Composition and coauthor of Imagining Rhetoric: Composing Women of the Early United States. 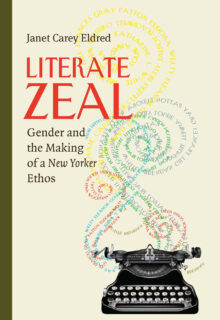 Gender and the Making of a New Yorker Ethos

In Literate Zeal, Janet Carey Eldred examines the rise of women magazine editors during the mid-twentieth century and reveals their unheralded role in creating a literary aesthetic for the American public. Between the sheets of popular magazines, editors offered belles-lettres to the masses and, in particular, middle-class women. Magazines became a place to find culture, humor, and intellectual affirmation alongside haute couture.

Eldred mines a variety of literary archives, notably the correspondence of Katharine Sargeant White of the New Yorker, to provide an insiderÆs view of the publisher-editor-author dynamic. Here, among WhiteÆs letters, memos, and markups, we see the deliberate shaping of literature to create a New Yorker ethos. Through her discrete phrasing, authors are coaxed by White to correct or wholly revise their work. Stories or poems by famous writers are rejected for being “dizzying” or “too literate.” With a surgeonÆs skill, “disturbing” issues such as sexuality and race are extracted from manuscripts.

Eldred chronicles the work of women (and a few men) editors at the major womenÆs magazines of the day. LadiesÆ Home Journal, Mademoiselle, Vogue, and others enacted an editorial style similar to that of the New Yorker by offering literature, values, and culture to an educated and aspiring middle class. Publishers effectively convinced readers that middlebrow stories (and by association their audience) had much loftier pursuits. And they were right. These publications created and sustained a mass literacy never before seen in American publishing.