Jeffrey Herlihy-Mera is professor in and the director of the Humanities Department at the University of Puerto Rico–Mayagüez. He is the 2022 Obama Fellow at the Obama Institute for Transnational American Studies at Johannes Gutenberg University of Mainz. 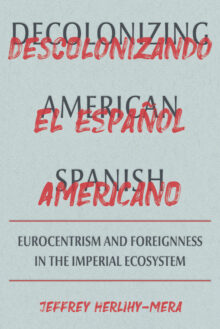 Eurocentrism and Foreignness in the Imperial Ecosystem

Despite a pronounced shift away from Eurocentrism in Spanish and Hispanic studies departments in US universities, many implicit and explicit vestiges of coloniality remain firmly in place. While certain national and linguistic expressions are privileged, others are silenced with predictable racial and gendered results. Decolonizing American Spanish challenges not only the hegemony of Spain and its colonial pedagogies, but also the characterization of Spanish as a foreign language in the United States. By foregrounding Latin American cultures and local varieties of Spanish and reconceptualizing the foreign as domestic, Jeffrey Herlihy-Meraworks to create new conceptual maps, revise inherited ones, and institutionalize marginalized and silenced voices and their stories. Considering the University of Puerto Rico as a point of context, this book brings attention to how translingual solidarity and education, a commitment to social transformation, and the engagement of student voices in their own languages can reinvent colonized education.