Jose Enrique Miguens taught at the Catholic University of Argentina, directed the institute of Motivational and Social Research in Buenos Aires, and served in the Argentine Ministry of the Presidency. 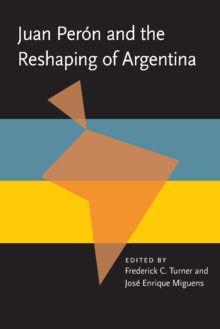 Juan Peron and the Reshaping of Argentina

Although Juan Peron changed the course of modern Argentine history, scholars have often interpreted him in terms of their own ideologies and interests, rather than seeing the effect of this man and his movement had on the Argentine people. The essays in this volume seek to uncover the man behind the myth, to define the true nature of Peronism. Several chapters view Perón’s rise to power, his deposition and eighteen-year exile, and his dramatic return in 1973. Others examine: opposing forces in modern Argentina, including the church and its role in politics; the conflict between landed stancieros and urban industrialists, terrorist activities and their populist support base; Peronism and the labor movement; and Evita Perón’s role in advancing the political rights of women.