Joseph D. Martin is a teaching associate in the Department of History and Philosophy of Science at the University of Cambridge. He edits Physics in Perspective and currently serves as Vice Chair of the Forum on the History of Physics for the American Physical Society. 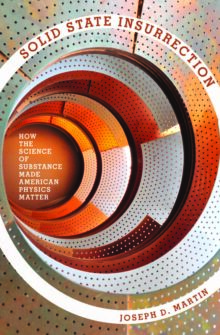 How the Science of Substance Made American Physics Matter

Solid state physics, the study of the physical properties of solid matter, was the most populous subfield of Cold War American physics. Despite prolific contributions to consumer and medical technology, such as the transistor and magnetic resonance imaging, it garnered less professional prestige and public attention than nuclear and particle physics.
Solid State Insurrection argues that solid state physics was essential to securing the vast social, political, and financial capital Cold War physics enjoyed in the twentieth century. Solid state’s technological bent, and its challenge to the “pure science” ideal many physicists cherished, helped physics as a whole respond more readily to Cold War social, political, and economic pressures. Its research kept physics economically and technologically relevant, sustaining its cultural standing and policy influence long after the sheen of the Manhattan Project had faded. With this book, Joseph D. Martin brings a new perspective to some of the most enduring questions about the role of physics in American history.