Milne Holton is professor of English and comparative literature at the University of Maryland. Among his books are The Big Horse: Stories of Modern Macedonia, Reading the Ashes, The New Polish Poetry, Austrian Poetry Today, and with Mihailovich, Serbian Poetry from the Beginnings to the Present. 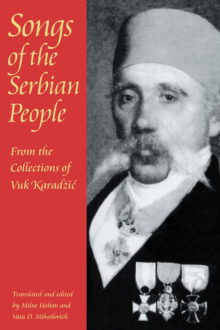 Songs of the Serbian People

From the Collections of Vuk Karadzic

In the early nineteenth century, Vuk Karadzic, a Serb scholar and linguist, collected and eventually published transcriptions of the traditional oral poetry of the South Slavs. It was a monumental and unprecedented undertaking. Karadzic gathered and heard performances of the rich songs of Balkan peasants, outlaws, and professional singers and their rebel heroes. His four volumes constitute the classic anthology of Balkan oral poetry, treasured for nearly two centuries by readers of all literatures, and influential to such literary giants as Goethe, Merimee, Pushkin, Mickiewicz, and Sir Walter Scott.
This edition of the songs offers the most complete and authoritative translations ever assembled in English. Holton and Mihailovich, leading scholars of Slavic literature, have preserved here the unique meter and rhythm at the heart of Serbian oral poetry, as well as the idiom of the original singers. Extensive notes and comments aid the reader in understanding the poems, the history they record and the oral tradition that lies beneath them, the singers and their audience.
The songs contain seven cycles, identified here in sections titled: Songs Before History, Before Kosovo, the Battle of Kosovo, Marko Karadzic, Under the Turks, Songs of the Outlaws, and Songs of the Serbian Insurrection. The editors have selected the best known and most representative songs from each of the cycles. A complete biography is also provided.