Nina Perlina, who survived the siege of Leningrad as a young child, is a professor in the department of Slavic Languages and Literatures at Indiana University. 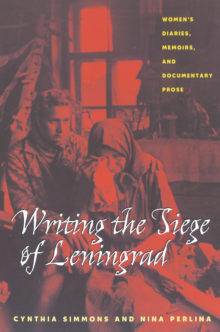 Writing the Siege of Leningrad

Silver Winner, ForeWord Magazine Book of the Year, History
From September 1941 until January 1944, Leningrad suffered under one of the worst sieges in the history of warfare. At least one million civilians died, many during the terribly cold first winter. Bearing the brunt of this hardship—and keeping the city alive through their daily toil and sacrifice—were the women of Leningrad. Yet their perspective on life during the siege has been little examined.
Cynthia Simmons and Nina Perlina have searched archival holdings for letters and diaries written during the siege, conducted interviews with survivors, and collected poetry, fiction, and retrospective memoirs written by the blokadnitsy (women survivors) to present a truer picture of the city under siege. In simple, direct, even heartbreaking language, these documents tell of lost husbands, mothers, children; meager rations often supplemented with sawdust and other inedible additives; crime, cruelty, and even cannibalism. They also relate unexpected acts of kindness and generosity; attempts to maintain cultural life through musical and dramatic performances; and provide insight into a group of ordinary women reaching beyond differences in socioeconomic class, ethnicity, and profession in order to survive in extraordinary times.