Per Anders Rudling is associate professor of history at Lund University, Sweden. 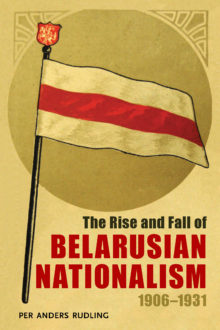 By Per Anders Rudling

The revolution of 1905 opened a window of opportunity, and debates swirled around definitions of ethnic, racial, or cultural belonging. By March of 1918, a small group of nationalists had declared the formation of a Belarusian People’s Republic (BNR), with territories based on ethnographic claims. Less than a year later, the Soviets claimed roughly the same area for a Belarusian Soviet Socialist Republic (BSSR). Belarusian statehood was declared no less than six times between 1918 and 1920. In 1921, the treaty of Riga officially divided the Belarusian lands between Poland and the Soviet Union. Polish authorities subjected Western Belarus to policies of assimilation, alienating much of the population. At the same time, the Soviet establishment of Belarusian-language cultural and educational institutions in Eastern Belarus stimulated national activism in Western Belarus. Sporadic partisan warfare against Polish authorities occurred until the mid-1920s, with Lithuanian and Soviet support. On both sides of the border, Belarusian activists engaged in a process of mythmaking and national mobilization. By 1926, Belarusian political activism had peaked, but then waned when coups d’états brought authoritarian rule to Poland and Lithuania. The year 1927 saw a crackdown on the Western Belarusian national movement, and in Eastern Belarus, Stalin’s consolidation of power led to a brutal transformation of society and the uprooting of Belarusian national communists.

As a small group of elites, Belarusian nationalists had been dependent on German, Lithuanian, Polish, and Soviet sponsors since 1915. The geopolitical rivalry provided opportunities, but also liabilities. After 1926, maneuvering this complex and progressively hostile landscape became difficult. Support from Kaunas and Moscow for the Western Belarusian nationalists attracted the interest of the Polish authorities, and the increasingly autonomous republican institutions in Minsk became a concern for the central government in the Kremlin.

As Rudling shows, Belarus was a historic battleground that served as a political tool, borderland, and buffer zone between greater powers. Nationalism arrived late, was limited to a relatively small elite, and was suppressed in its early stages. The tumultuous process, however, established the idea of Belarusian statehood, left behind a modern foundation myth, and bequeathed the institutional framework of a proto-state, all of which resurfaced as building blocks for national consolidation when Belarus gained independence in 1991.