Philip W. Bonsal was a distinguished career diplomat whoÑin the wake of Castro’s RevolutionÑwas the American Ambassador to Cuba. He also served as Ambassador to Colombia, Bolivia, and Morocco. 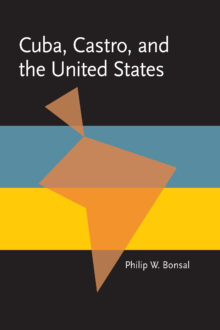 Cuba, Castro, and the United States

Bonsal combines his memoirs of his experiences in Havana with an analysis of the relationship between Cuba and the United States both during the Batista and Castro regimes and during the earlier history of the Cuban Republic.

His discussion of Castro's personality is incisive, portraying the Maximum Leader's increasing animosity toward the United States until the final break-off of diplomatic relations between the two countries. Bonsal's observations of Castro and the sociopolitical climate in Cuba are perhaps the most incisive and accurate of any to date on the subject.

All the events from the Revolution to the termination of diplomatic relations are discussed. Of particular interest are Bonsal's accounts of his attempt to find a basis for a rational relationship between the United States and Castro's Revolution, the rejection of that attempt by Castro, and the abandonment by Washington of the policy of nonintervention in Cuban affairs which the Ambassador had advocated.

Finally, in an evaluation of future relations between the two countries, Bonsal analyzes some of the major problems of the coming years.