Rick Hilles, associate professor of English at Vanderbilt University, is the author of the poetry collections, Brother Salvage, winner of the 2005 Agnes Lynch Starrett Poetry Prize and the 2006 Foreword Poetry Book of the Year, and A Map of the Lost World, a finalist for the Ohioana Book Award. He has been the recipient of a Whiting Award, the Amy Lowell Poetry Traveling Scholarship, and a Camargo Fellowship. He lives in Nashville. 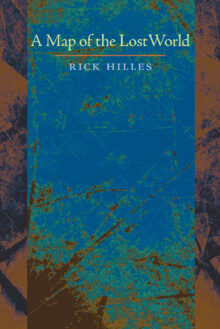 A Map of the Lost World

The poems that make up A Map of the Lost World range from tightly-wrought shorter lyrics to longer autobiographical narratives to patterns of homage (in several forms) of poets that Hilles admires and emulates (including Richard Hugo, James Wright, James Merrill and Larry Levis) to extended voice-driven meditations, one in the voice of a German Jewish woman, a prisoner who would escape a French concentration camp and go on to fight in the French resistance, to other efforts to confront history and not be devoured by history, and to locate, even resuscitate, friends lost to death, if only provisionally; though each poem in A Map of the Lost World is highly crafted and diversely rendered, in this collection, each poem finds its unifying impulse in itÆs makerÆs desire to span vast distances to reach loved ones, beloved others, the various families of friends, fueled by an almost gymnastic imagination that vaults itself into almost any space&mdash;going to almost any length&mdash;sustained by the various forms of love, which, after all, may be as close as any of us has come (in this or any life) to knowing and warming ourselves, if not also at times being scalded by, the immortal fires of the Infinite. 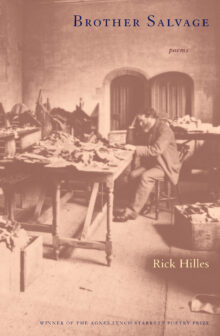 The name of the title poem&mdash;&ldquo;Brother Salvage: a genizah,&rdquo; provides a skeleton key to unlock the powerful forces that bind Rick Hilles&rsquo;s collection. A genizah is a depository, or hiding place, for sacred texts. It performs a double function: to keep hallowed objects safe and to prevent more destructive forces from circulating and causing further harm. Brother Salvage serves exactly this purpose. The poems are heartrending and incisive, preserving stories and lives that should not be forgotten. Yet, through the poet&rsquo;s eloquent craft, painful histories and images are beautifully and luminously contained. Like scholars sifting through ancient genizahs in search of spiritual and historical insights, readers immersed in Brother Salvage will find, at the heart of the book, the most sacred entity: hope.