Robert E. Jones is professor emeritus of history at the University of Massachusetts, Amherst. He is the author of two previous books, Provincial Development in Russia: Catherine II and Jakob Sievers and The Emancipation of the Russian Nobility, 1763-1785. 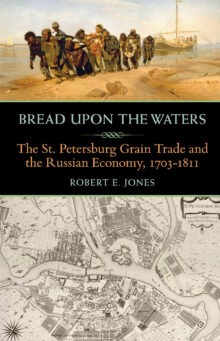 Bread upon the Waters

In eighteenth-century Russia, as elsewhere in Europe, bread was a dietary staple&mdash;truly grain was the staff of economic, social, and political life. Early on Tsar Peter the Great founded St. Petersburg to export goods from Russia’s vast but remote interior and by doing so to drive Russia’s growth and prosperity. But the new city also had to be fed with grain brought over great distances from those same interior provinces. In this compelling account, Robert E. Jones chronicles how the unparalleled effort put into the building of a wide infrastructure to support the provisioning of the newly created but physically isolated city of St. Petersburg profoundly affected all of Russia’s economic life and, ultimately, the historical trajectory of the Russian Empire as a whole.

Jones details the planning, engineering, and construction of extensive canal systems that efficiently connected the new capital city to grain and other resources as far away as the Urals, the Volga, and Ukraine. He then offers fresh insights to the state’s careful promotion and management of the grain trade during the long eighteenth century. He shows how the government established public granaries to combat shortages, created credit instruments to encourage risk taking by grain merchants, and encouraged the development of capital markets and private enterprise. The result was the emergence of an increasingly important cash economy along with a reliable system of provisioning the fifth largest city in Europe, with the political benefit that St. Petersburg never suffered the food riots common elsewhere in Europe.

Thanks to this well-regulated but distinctly free-market trade arrangement, the grain-fueled economy became a wellspring for national economic growth, while also providing a substantial infrastructural foundation for a modernizing Russian state. In many ways, this account reveals the foresight of both Peter I and Catherine II and their determination to steer imperial Russia’s national economy away from statist solutions and onto a path remarkably similar to that taken by Western European countries but distinctly different than that of either their Muscovite predecessors or Soviet successors.