Rory Yeomans is a senior international research analyst at the International Directorate of the UK Ministry of Justice. 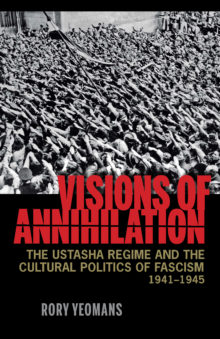 The Ustasha Regime and the Cultural Politics of Fascism, 1941–1945

The fascist Ustasha regime and its militias carried out a ruthless campaign of ethnic cleansing that killed an estimated half million Serbs, Jews, and Gypsies, and ended only with the defeat of the Axis powers in World War II.

In Visions of Annihilation, Rory Yeomans analyzes the Ustasha movementÆs use of culture to appeal to radical nationalist sentiments and legitimize its genocidal policies. He shows how the movement attempted to mobilize poets, novelists, filmmakers, visual artists, and intellectuals as purveyors of propaganda and visionaries of a utopian society. Meanwhile, newspapers, radio, and speeches called for the expulsion, persecution, or elimination of “alien” and “enemy” populations to purify the nation. He describes how the dual concepts of annihilation and national regeneration were disseminated to the wider population and how they were interpreted at the grassroots level.

Yeomans examines the Ustasha movement in the context of other fascist movements in Europe. He cites their similar appeals to idealistic youth, the economically disenfranchised, racial purists, social radicals, and Catholic clericalists. Yeomans further demonstrates how fascism created rituals and practices that mimicked traditional religious faiths and celebrated martyrdom.

Visions of Annihilation chronicles the foundations of the Ustasha movement, its key actors and ideologies, and reveals the unique cultural, historical, and political conditions present in interwar Croatia that led to the rise of fascism and contributed to the cataclysmic events that tore across the continent.