S. Laurel Weldon is an assistant professor of political science at Purdue University. 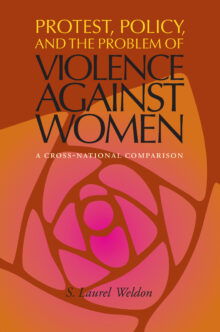 Protest, Policy, and the Problem of Violence against Women

Violence against women is one of the most insidious social ills facing the world today. Yet governmental response is inconsistent, ranging from dismissal to aggressive implementation of policies and programs to combat the problem. In her comparative study of thirty-six democratic governments, Laurel Weldon examines the root causes and consequences of the differences in public policy from Northern Europe to Latin America.
She reveals that factors that often influence the development of social policies do not determine policies on violence against women. Neither economic level, religion, region, nor the number of women in government determine governmental responsiveness to this problem. Weldon demonstrates, for example, that Nordic governments take no more action to combat violence against women than Latin American governments, even though the Swedish welfare state is often considered a leader in social policy, particularly with regard to women’s issues.
Instead, the presence of independently organized, active women’s movements plays a greater role in placing violence against women on the public agenda. The breadth and scope of governmental response is greatly enhanced by the presence of an office dedicated to promoting women’s status.
Weldon closes with practical lessons and insights to improve government action on violence against women and other important issues of social justice and democracy.