Sarah Allen is associate professor in the English Department at the University of Hawaiʻi at Mānoa, where she serves as a specialist in rhetoric and composition and as the director of the Composition and Rhetoric, First-Year Writing, and Mentoring Programs. Allen is the author of Beyond Argument: Essaying as a Practice of (Ex)Change. 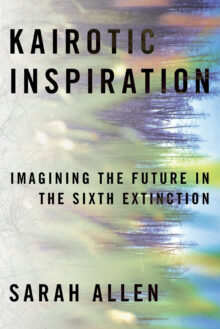 Imagining the Future in the Sixth Extinction

On the precipice of the Sixth Extinction, we face a frightening fate—ongoing ecological crises that may result in not only the extinction of a million species within decades but another mass extinction event like the one that wiped out the dinosaurs. In Kairotic Inspiration: Imagining the Future in the Sixth Extinction, Sarah Allen suggests that humans face this future, whatever it brings, by attending to the ways in which all beings are caught in the entangled processes of becoming. But change is often painful and requires inspiration. Allen explores a theory that shifts the concept of inspiration away from the unique genius of the individual and instead situates it within conceptual, human and nonhuman animal relations that can disrupt the state of being. To expand the understanding of change beyond the polarized binary that defines difference, the author builds on Nietzsche’s conceptualization of the Dionysian, which explains how the self is unmade through immersive experiences. This unmaking creates room for a different experience of becoming, one which Donna Haraway calls “becoming-with” and “producing-with.” In the end, Allen demonstrates how deepening kairotic connections can transform us as beings, thrusting us further into the processes of becoming and embracing the change that is possible in this living, changing, endangered world.