Sarah W. Walden is an assistant professor at Baylor University. She specializes in American studies and rhetoric. 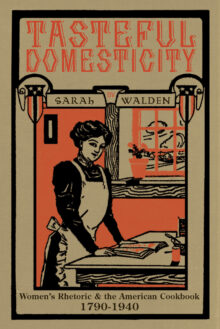 Tasteful Domesticity demonstrates how women marginalized by gender, race, ethnicity, and class used the cookbook as a rhetorical space in which to conduct public discussions of taste and domesticity. Taste discourse engages cultural values as well as physical constraints, and thus serves as a bridge between the contested space of the self and the body, particularly for women in the nineteenth century. Cookbooks represent important contact zones of social philosophies, cultural beliefs, and rhetorical traditions, and through their rhetoric, we witness women’s roles as republican mothers, sentimental evangelists, wartime fundraisers, home economists, and social reformers. Beginning in the early republic and tracing the cookbook through the publishing boom of the nineteenth century, the Civil War and Reconstruction, the Progressive era, and rising racial tensions of the early twentieth century, Sarah W. Walden examines the role of taste as an evolving rhetorical strategy that allowed diverse women to engage in public discourse through published domestic texts.