From Jamaica, and born to a Jamaican father and Venezuelan mother, Shara McCallum is the author of six books published in the US & UK, including No Ruined Stone. McCallum’s poems and essays have appeared in journals, anthologies, and textbooks throughout the US, Caribbean, Latin America, Europe, and Israel. La historia es un cuarto/History is a Room, an anthology of poems selected from across her six books and translated into Spanish by Adalber Salas Hernández, was published in 2021 by Mantis Editores in Mexico. In addition to Spanish, her poems have been translated into Italian, French, Romanian, Turkish, and Dutch and have been set to music by composers Marta Gentilucci and Gity Razaz. Awards for her work include the OCM Bocas Prize for Caribbean Literature (for her previous book, Madwoman), a Witter Bynner Fellowship from the Library of Congress, an NEA Fellowship in Poetry, the Oran Robert Perry Burke Award for Nonfiction, and the Agnes Lynch Starrett Prize (for her first book, The Water Between Us). McCallum delivers readings, lectures, and workshops at universities and literary festivals in the US and internationally and has taught creative writing and literature at various universities. She is presently on the faculty of the Pacific Low-Residency MFA and is a Professor of English at Penn State University. McCallum was appointed the 2021-22 Penn State Laureate. 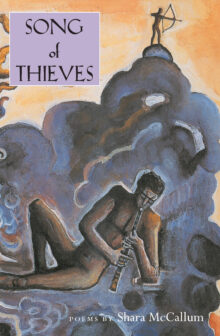 Song of Thieves delves into issues of racial identity and politics, the immigrant experience, and the search for “home” and family histories. In this follow-up to her award-winning debut collection, The Water Between Us, Shara McCallum artfully draws from the language and imagery of her Caribbean background to play a haunting and soulful tune. 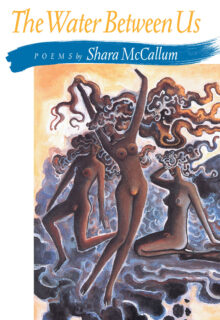 The Water Between Us

The Water Between Us is a poetic examination of cultural fragmentation, and the exile's struggle to reconcile the disparate and often conflicting influences of the homeland and the adopted country. The book also centers on other kinds of physical and emotional distances: those between mothers and daughters, those created by being of mixed racial descent, and those between colonizers and the colonized. Despite these distances, or perhaps because of them, the poems affirm the need for a multilayered and cohesive sense of self. McCallum's language is precise and graceful. Drawing from Anancy tales, Greek myth, and biblical stories, the poems deftly alternate between American English and Jamaican patois, and between images both familiar and surreal.