Tatjana Aleksic is associate professor of South Slavic languages and literatures and comparative literature at the University of Michigan. 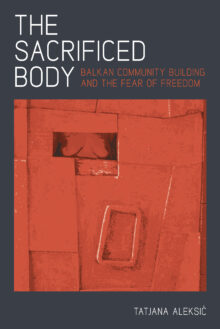 Balkan Community Building and the Fear of Freedom

Living in one of the world’s most volatile regions, the people of the Balkans have witnessed unrelenting political, economic, and social upheaval. In response, many have looked to building communities, both psychologically and materially, as a means of survival in the wake of crumbling governments and states. The foundational structures of these communities often center on the concept of individual sacrifice for the good of the whole. Many communities, however, are hijacked by restrictive ideologies, turning them into a model of intolerance and exclusion.

In The Sacrificed Body, Tatjana Aleksic examines the widespread use of the sacrificial metaphor in cultural texts and its importance to sustaining communal ideologies in the Balkan region. Aleksic further relates the theme to the sanctioning of ethnic cleansing, rape, and murder in the name of homogeneity and collective identity. Aleksic begins her study with the theme of the immurement of a live female body in the foundation of an important architectural structure, a trope she finds in texts from all over the Balkans. The male builders performing the sacrificial act have been called by a higher power who will ensure the durability of the structure and hence the patriarchal community as a whole.

In numerous examples ranging from literature to film and performance art, Aleksic views the theme of sacrifice and its relation to exclusion based on gender, race, class, sexuality, religion, or politics for the sake of community building. According to Aleksic, the sacrifice narrative becomes most prevalent during times of crisis brought on by wars, weak governments, foreign threats, or even globalizing tendencies. Because crisis justifies the very existence of restrictive communities, communalist ideology thrives on its perpetuation. They exist in a symbiotic relationship. Aleksic also acknowledges the emancipatory potential of a genuine community, after it has shaken off its ideological character.

Aleksic employs cultural theory, sociological analysis, and human rights studies to expose a historical narrative that is predominant regionally, if not globally. As she determines, in an era of both Western and non-Western neoliberalism, elitist hegemony will continue to both threaten and bolster communities along with their segregationist tactics.