Char Miller is professor and chair of the history department at Trinity University in San Antonio, Texas. He is co-author of The Greatest Good: 100 Years of Forestry in America (Society of American Foresters, 1999), and editor of Fluid Arguments: Five Centuries of Western Water Conflict (University of Arizona Press, 2001). 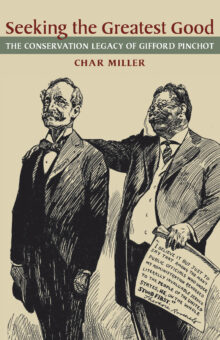 The Conservation Legacy of Gifford Pinchot

President John F. Kennedy officially dedicated the Pinchot Institute for Conservation Studies on September 24, 1963 to further the legacy and activism of conservationist Gifford Pinchot (1865&ndash;1946). Pinchot was the first chief of the United States Forest Service, appointed by Theodore Roosevelt in 1905. During his five-year term, he more than tripled the national forest reserves to 172 million acres. A pioneer in his field, Pinchot is widely regarded as one of the architects of American conservation and an adamant steward of natural resources for future generations.
Author Char Miller highlights many of the important contributions of the Pinchot Institute through its first fifty years of operation. As a union of the United States Forest Service and the Conservation Foundation, a private New York-based think tank, the institute was created to formulate policy and develop conservation education programs. Miller chronicles the institution’s founding, a donation of the Pinchot family, at its Grey Towers estate in Milford, Pennsylvania. He views the contributions of Pinchot family members, from the institute’s initial conception by Pinchot’s son, Gifford Bryce Pinchot, through the family’s ongoing participation in current conservation programming. Miller describes the institute’s unique fusion of policy makers, scientists, politicians, and activists to increase our understanding of and responses to urban and rural forestry, water quality, soil erosion, air pollution, endangered species, land management and planning, and hydraulic franking.
Miller explores such innovative programs as Common Waters, which works to protect the local Delaware River Basin as a drinking water source for millions; EcoMadera, which trains the residents of Cristobal Colón in Ecuador in conservation land management and sustainable wood processing; and the Forest Health-Human Health Initiative, which offers health-care credits to rural American landowners who maintain their carbon-capturing forestlands. Many of these individuals are age sixty-five or older and face daunting medical expenses that may force them to sell their land for timber.
Through these and countless other collaborative endeavors, the Pinchot Institute has continued to advance its namesake’s ambition to protect ecosystems for future generations and provide vital environmental services in an age of a burgeoning population and a disruptive climate. 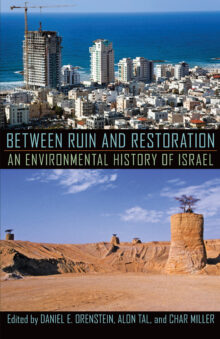 Between Ruin and Restoration

An Environmental History of Israel

The environmental history of Israel is as intriguing and complex as the nation itself. Situated on a mere 8,630 square miles, bordered by the Mediterranean Sea and Persian Gulf, varying from desert to forest, Israel’s natural environment presents innumerable challenges to its growing population. The country’s conflicted past and present, diverse religions, and multitude of cultural influences powerfully affect the way Israelis imagine, question, and shape their environment. Zionism, from the late nineteenth onward, has tempered nearly every aspect of human existence. Scarcities of usable land and water coupled with border conflicts and regional hostilities have steeled Israeli’s survival instincts. As this volume demonstrates, these powerful dialectics continue to undergird environmental policy and practice in Israel today.

Between Ruin and Restoration assembles leading experts in policy, history, and activism to address Israel’s continuing environmental transformation from the biblical era to the present and beyond, with a particular focus on the past one hundred and fifty years. The chapters also reflect passionate public debates over meeting the needs of Israel’s population and preserving its natural resources.

The chapters detail the occupations of the Ottoman Empire and British colonialists in eighteenth and nineteenth century Palestine, as well as Fellaheen and pastoralist Bedouin tribes, and how they shaped much of the terrain that greeted early Zionist settlers. Following the rise of the Zionist movement, the rapid influx of immigrants and ensuing population growth put new demands on water supplies, pollution controls, sanitation, animal populations, rangelands and biodiversity, forestry, marine policy, and desertification. Additional chapters view environmental politics nationally and internationally, the environmental impact of Israel’s military, and considerations for present and future sustainability. 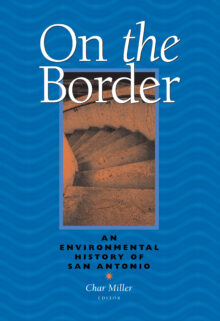 An Environmental History Of San Antonio

Over the past 300 years, settlement patterns, geography, and climate have greatly affected the ecology of the south Texas landscape. Drawing on a variety of interests and perspectives, the contributors to On the Border probe these evolving relationships in and around San Antonio, the country’s ninth-largest city.Spanish, Mexican, and American settlers required open expanses of land for agriculture and ranching, displacing indigenous inhabitants. The high poverty traditionally felt by many residents, combined with San Antonio’s environment, has contributed to the development of the city’s unusually complex public health dilemmas. The national drive to preserve historic landmarks and landscapes has been complicated by the blight of homogenous urban sprawl. But no issue has been more contentious than that of water, particularly in a city entirely dependent on a single aquifer in a region of little rain. Managing these environmental concerns is the chief problem facing the city in the new century. 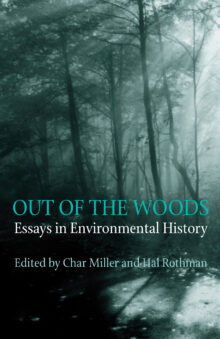 Out Of The Woods

Through the pages of Environmental History Review, now Environmental History, an entire discipline has been created and defined over time through the publication of the finest scholarship by humanists, social and natural scientists, and other professionals concerned with the complex relationship between people and our global environment. Out of the Woods gathers together the best of this scholarship.
Covering a broad array of topics and reflecting the continuing diversity within the field of environmental history, Out of the Woods begins with three theoretical pieces by William Cronon, Carolyn Merchant, and Donald Worster probing the assumptions that underlie the words and ideas historians use to analyze human interaction with the physical world. One of these – the concept of place – is the subject of a second group of essays. The political context is picked up in the third section, followed by a selection of some of the journal’s most recent contributions discussing the intersection between urban and environmental history. Water’s role in defining the contours of the human and natural landscape is undeniable and forms the focus of the fifth section. Finally, the global character of environmental issues emerges in three compelling articles by Alfred Crosby, Thomas Dunlap, and Stephen Pyne.
Of interest to a wide range of scholars in environmental history, law, and politics, Out of the Woods is intended as a reader for course use and a benchmark for the field of environmental history as it continues to develop into the next century.