Edward K. Muller is emeritus professor of history at the University of Pittsburgh, where he was a former chair of the Department of History, former director of the urban studies program, and a Fulbright Research Scholar in New Zealand. He is founding member and former chair of the Board of Trustees of the Rivers of Steel National Heritage Area. 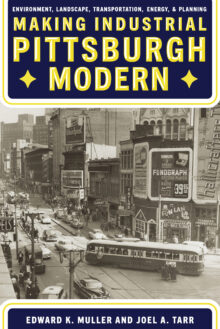 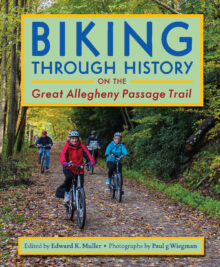 Biking through History on the Great Allegheny Passage Trail

The Great Allegheny Passage Trail is a world class biking, hiking, and recreational gateway that stretches nearly 150 miles from Pittsburgh, Pennsylvania, to Cumberland, Maryland, where it connects with the C&O Canal Towpath to reach Washington, DC. Showcasing all the natural beauty of the region, this former Indian path, trade route, military road, railway link, and portion of the original National Road is also a journey through American history. The book’s engaging narrative is complemented by the nature photography of Paul g Wiegman and an extensive selection of historical illustrations, all of which reveal the stunning scenery and history of the biking trail. This book captures the essence of the trail as a journey through both time and space, one that evokes all of the heritage and beauty of a region that would grow to prosper and help forge a nation. Formerly titled An Uncommon Passage: Traveling through History on the Great Allegheny Passage Trail, this is an updated paperback version with a revised introduction and new material that includes the completed trail area in the city of Pittsburgh. 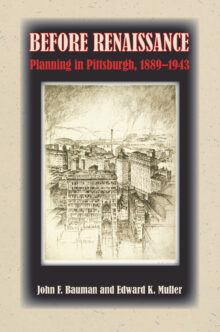 Before Renaissance examines a half-century epoch during which planners, public officials, and civic leaders engaged in a dialogue about the meaning of planning and its application for improving life in Pittsburgh.
Planning emerged from the concerns of progressive reformers and businessmen over the social and physical problems of the city. In the Steel City enlightened planners such as Frederick Law Olmsted, Jr., and Frederick Bigger pioneered the practical approach to reordering the chaotic urban-industrial landscape. In the face of obstacles that included the embedded tradition of privatism, rugged topography, inherited built environment, and chronic political fragmentation, they established a tradition of modern planning in Pittsburgh.
Over the years a m+lange of other distinguished local and national figures joined in the planning dialogue, among them the park founder Edward Bigelow, political bosses Christopher Magee and William Flinn, mayors George Guthrie and William Magee, industrialists Andrew Carnegie and Howard Heinz, financier Richard King Mellon, and planning luminaries Charles Mulford Robinson, Frederick Law Olmsted Jr., Harland Bartholomew, Robert Moses, and Pittsburgh&rsquo;s Frederick Bigger. The famed alliance of Richard King Mellon and Mayor David Lawrence, which heralded the Renaissance, owed a great debt to Pittsburgh&rsquo;s prior planning experience.
John Bauman and Edward Muller recount the city&rsquo;s long tradition of public/private partnerships as an important factor in the pursuit of orderly and stable urban growth. Before Renaissance provides insights into the major themes, benchmarks, successes, and limitations that marked the formative days of urban planning. It defines Pittsburgh&rsquo;s key role in the vanguard of the national movement and reveals the individuals and processes that impacted the physical shape and form of a city for generations to come.