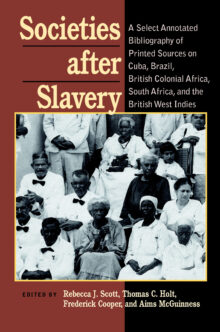 One of the massive transformations that took place in the nineteenth and early twentieth centuries was the movement of millions of people from the status of slaves to that of legally free men, women, and children. Societies after Slavery provides thousands of entries and rich scholarly annotations, making it the definitive resource for scholars and students engaged in research on postemancipation societies in the Americas and Africa.

The Archives of Cuba/Los archivos de Cuba is the first comprehensive guide to the archival holdings and manuscript collections located throughout the fourteen provinces of Cuba, and each is identified with its local address. The collections hold a vast assortment of research materials from the sixteenth through the twentieth centuries. Records encompass family papers, government documents, parish collections, notary records, corporate papers, archives of private associations, personal collections, and much more. Sites listed include the Archivo Nacional, the Biblioteca Nacional Jose Marti, provincial archives, municipal archives and museums, parish archives, cemetery archives, and many others. The volume also provides a general descriptive inventory of each archival holding and manuscript collection. It is an indispensable reference tool for anyone conducting research on Cuban history or culture. 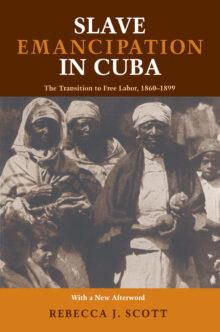 Slave Emancipation in Cuba is the classic study of the end of slavery in Cuba. Rebecca J. Scott explores the dynamics of Cuban emancipation, arguing that slavery was not simply abolished by the metropolitan power of Spain or abandoned because of economic contradictions. Rather, slave emancipation was a prolonged, gradual and conflictive process unfolding through a series of social, legal, and economic transformations.

Scott demonstrates that slaves themselves helped to accelerate the elimination of slavery. Through flight, participation in nationalist insurgency, legal action, and self-purchase, slaves were able to force the issue, helping to dismantle slavery piece by piece. With emancipation, former slaves faced transformed, but still very limited, economic options. By the end of the nineteenth-century, some chose to join a new and ultimately successful rebellion against Spanish power.

In a new afterword, prepared for this edition, the author reflects on the complexities of postemancipation society, and on recent developments in historical methodology that make it possible to address these questions in new ways.