(geographically arranged from Cumberland to Pittsburgh) 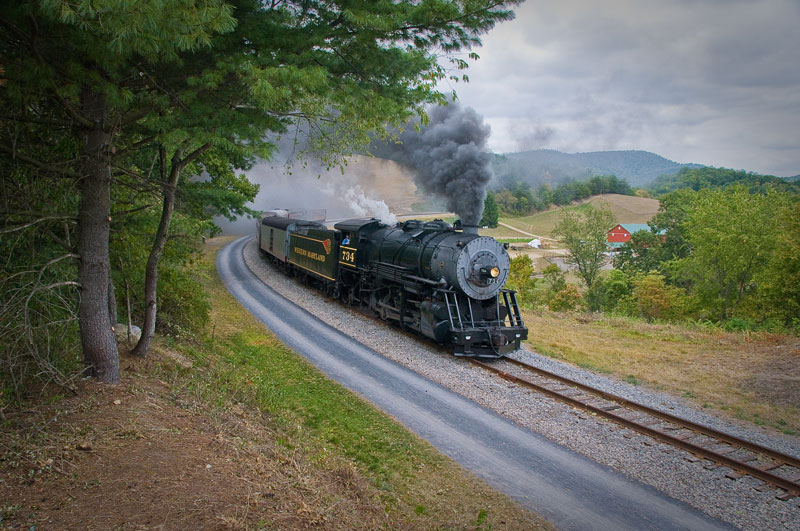 For the first 13 miles the GAP is a rail-with-trail. You share the route with a classic steam train. Time your ride to catch the Western Maryland Scenic Railroad’s Mt. Thunder pounding through the sweeping 1/2 mile Helmstetter’s Curve on its way up the east side of Big Savage Mountain to Frostburg, MD.

Stop and relax at the Big Savage Overlook. From the edge of the trail you look southeast to waves of folded mountains and 3 states, PA, MD, and WV. Just beyond the vista is Big Savage Tunnel. All 3,294 feet are lighted but keep your jacket handy for the year-round 54 degree interior. 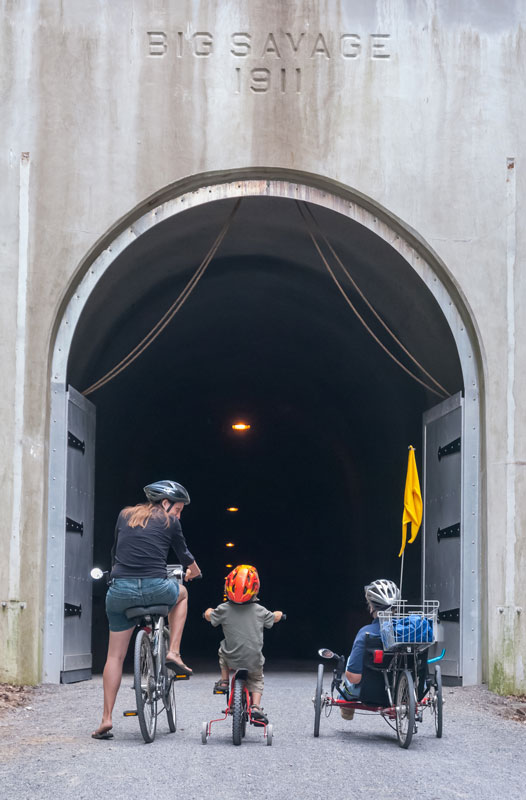 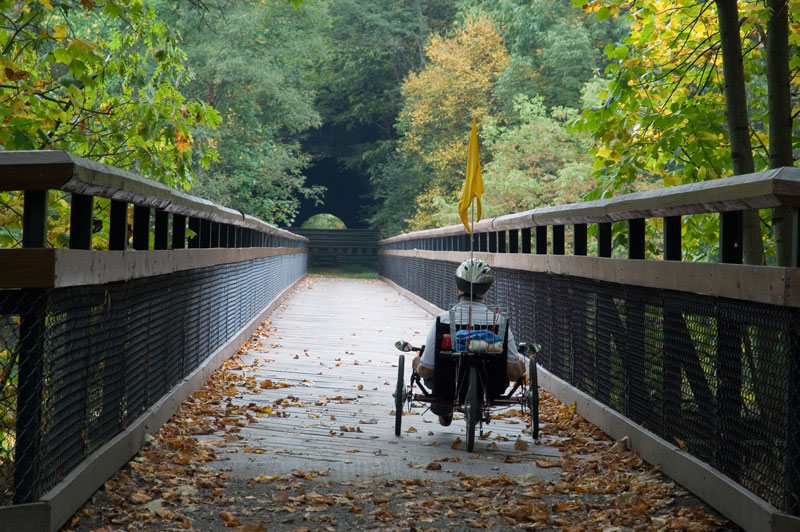 In the heart of the scenic Allegheny Mountains the GAP short cuts across a gooseneck of the Casselman River. First you cross a bridge with the river just 40 feet below, then ride through a 849 foot tunnel. You then cross another bridge, but this time the Casselman is more than 100 feet below. Keep your camera handy, the views are stunning. (The tunnel is being restored at present and there is a scenic by-pass trail. Restoration is expected to be completed in late summer of 2015.) 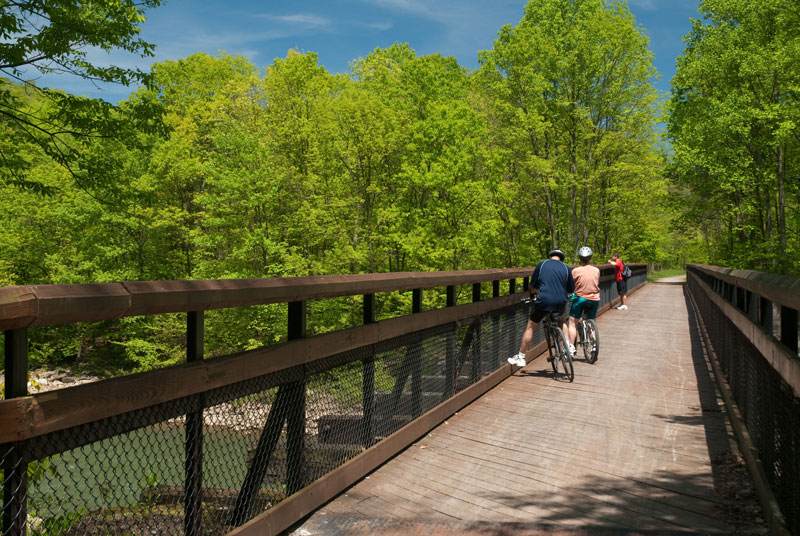 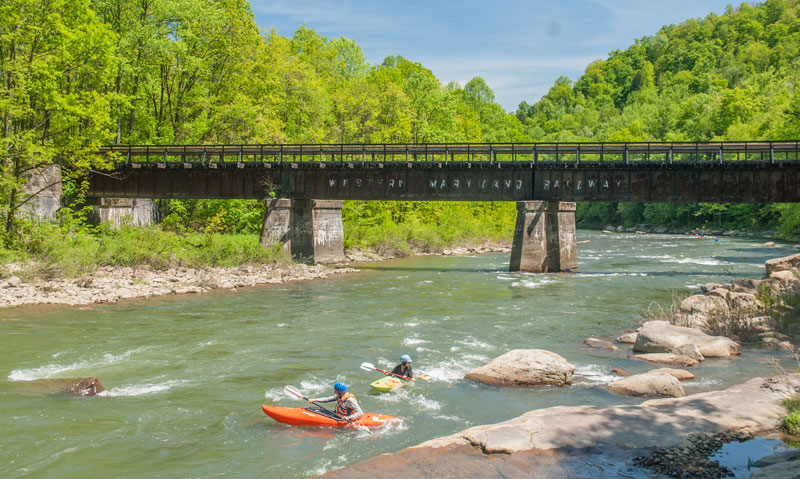 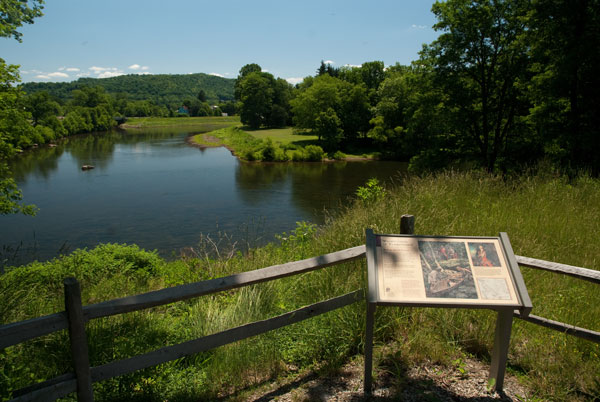 George Washington slept here. On May 20th 1754, British Lieutenant Colonel George Washington and a small contingent of soldiers camped at the junction of the Youghiogheny and Casselman Rivers, and Laurel Hill Creek. After scouting the whitewater Yough downstream Washington abandoned the water route to French Fort Duquesne at the head of the Ohio, and headed overland.

Following the path of the Youghiogheny River, the GAP trail provides a route through the mountains rather than over them. Between Confluence and Ohiopyle the Yough River and the trail cut through the heart of Laurel Ridge. The summit is over 1,600 feet above the river and is Pennsylvania’s deepest water gap.

The GAP passes through the small mountain town of Ohiopyle, PA. Just past the restored Western Maryland Railway station, now a Visitor Center, a low bridge crosses the Youghiogheny River. In another 1/2 mile is another bridge with the Yough 100 feet below. Between the two bridges the river made a 1.5 mile loop and plunged over Ohiopyle Falls and tumbled through some of the best white water in the eastern US. The views from the High Bridge of the river, rafters, and river gorge are stunning. 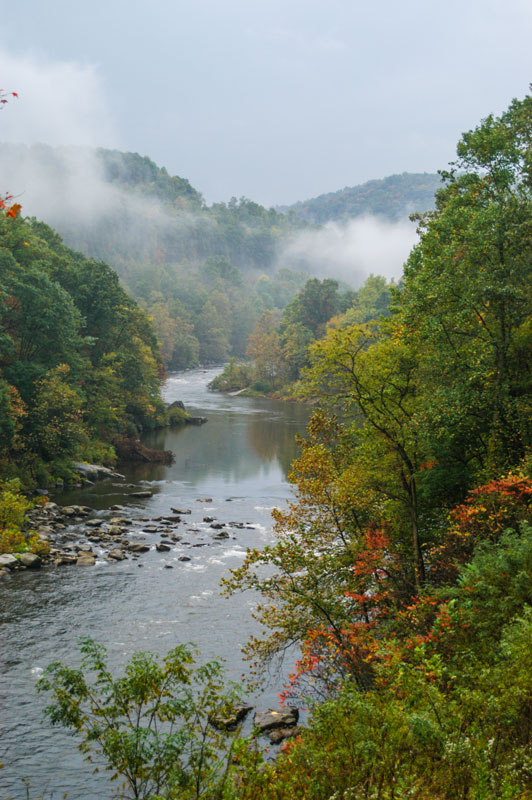 On the 19 mile ride from Ohiopyle to Connellsville the trail follows the river. You are always within earshot but the rushing water is hidden in the deep gorge. Just beyond Bruner Run a cleared area provides a view of the Yough edged by steep wooded slopes. Massive rocks proved a suitable foreground and a great place to spread a picnic lunch.

Through the Allegheny Mountains you rode past rocks millions of years old. Just outside of Cedar Creek Park you ride past rocks formed yesterday. Officially known as the Port Royal Tufa this unique geologic site is where water laden with dissolved minerals is slowly seeping from a spring. When the water hits the air the minerals precipitate and form new rock. Estimates place the age of the tufa at 18,000 years, but a thin layer was laid down just yesterday.

Forests, farms, white water rivers, and quaint small towns comprise much of the GAP from Cumberland north. Once the trail enters the Monongahela River Valley the bucolic scenes end and the legacy of steel begins. Between two new bridges over existing railroads there is splendid view of the Edgar Thompson Plant of US Steel. The mill has been active since 1872. Just beyond is a side ravine with another steel feature—The Phantom’s Revenge, formerly know as the Steel Phantom and the largest roller coaster in Kennywood Park. Make sure to stop and watch riders plunge toward you at 85 MPH on a 228 foot drop.

See more beautiful photos, history, and guides in An Uncommon Passage: Traveling through History on the Great Allegheny Passage Trail