“Picasso’s Blue Period”: An Excerpt from The Prince of Mournful Thoughts and Other Stories

“Picasso’s Blue Period”: An Excerpt from The Prince of Mournful Thoughts and Other Stories 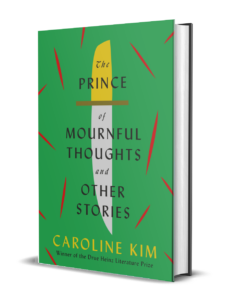 The winner of this year’s Drue Heinz Literature Prize, The Prince of Mournful Thoughts and Other Stories by Caroline Kim, is a captivating debut. Exploring what it means to be human through the Korean diaspora, Kim’s stories feature many voices. From a teenage girl in 1980’s America, to a boy growing up in the middle of the Korean War, to an immigrant father struggling to be closer to his adult daughter, or to a suburban housewife whose equilibrium depends upon a therapy robot, each character must face their less-than-ideal circumstances and find a way to overcome them without losing themselves. Language often acts as a barrier as characters try, fail, and momentarily succeed in connecting with each other. With humor, insight, and curiosity, Kim’s wide-ranging stories explore themes of culture, communication, travel, and family. Ultimately, what unites these characters across time and distance is their longing for human connection and a search for the place—or people—that will feel like home.

There is a picture in my daughter’s house of a man wearing a black overcoat and standing against a blue wall. His hair is the same black as his heavy coat and he has a wide forehead, a face that is pale and angular with blue shadows beneath his dark eyes, a smudge of mustache that curves down around his unhappy mouth. It is a sad face. An empty face. Why does my daughter hang a picture of this man in her house?

In the upper left corner in white letters is printed his name PABLO PICASSO and the name of the museum in Paris where the original of this painting hangs. The letters are so small that I have had to nearly press my nose into the glass frame in order to read them.

When I ask my daughter about this painting, she tells me that she acquired it during her honeymoon in Paris, at the very museum where the original now hangs. In fact, she and my son-in-law saw the original for themselves and liked it so much that they wanted a reproduction. She said it cost them twenty-five dollars. Twenty-five dollars seems like a lot of money for a picture of a lonely man staring at you while you are eating dinner. This is the first time I have seen this picture. I have not seen my daughter since her marriage last year.

I do not ask my daughter why she chose to hang this picture in her dining room, because these are not questions she prefers to answer. She is impatient with questions, much like I used to be, my wife tells me. I ask my daughter nothing and let her tell me what she would like me to know, about such things as how old everything in Paris is, how the apartment they stayed in was built during the American Revolution, how the narrow streets around the museum are paved in rough stones. In the cafés, she says, they position all the chairs facing the street so that one can see the flow of life traveling by. People sit with their little cups and watch each other for entertainment, unlike in America, where it is considered rude to look at other people. I tell her that this need for space that Americans have comes from the vast size of the country. In Korea, people stand much closer to one another on the streets, in the subways, in the lines at stores. It comes from necessity. She nods. There is so much I wish to make my daughter understand, but cannot. I am sure she feels much the same way.

The Prince of Mournful Thoughts and Other Stories will be on sale October 6 and is currently available for preorder. More information and work by Caroline can be found at carolinekim.net.
caroline kim drue heinz literature prize