The fourth prompt for Read Smarter is “Read a collection of poems.” This can be a collection by a single author or an anthology, a book of haiku or a book of complex free verse, as long as it’s published by a university press!

You can download the full checklist here: Read Smarter

Here are some suggestions from participating presses, presented alphabetically by author. Feel free to recommend other titles in the comments. We may occasionally update this list. 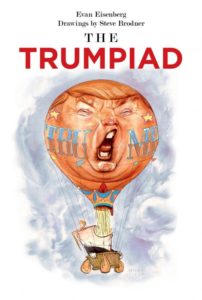 The Trumpiad, by Evan Eisenberg and Steve Brodner (MIT Press)

In their caustic, uproarious Trumpiad, poet Evan Eisenberg and artist Steve Brodner present a satire in verse for our demented times. Inspired by Swift, Byron, and Ogden Nash as much as by John Oliver and Stephen Colbert, Eisenberg sets the stage (“Muse, you’re fired”) and then traces our hero from the murk of his ancestry in the form of his grandfather Friedrich (an enterprising immigrant who ran a bordello) to the latest presidential high crimes and misadventures.

Catalog of Unabashed Gratitude is a sustained meditation on that which goes away—loved ones, the seasons, the earth as we know it—that tries to find solace in the processes of the garden and the orchard. That is, this is a book that studies the wisdom of the garden and orchard, those places where all—death, sorrow, loss—is converted into what might, with patience, nourish us. 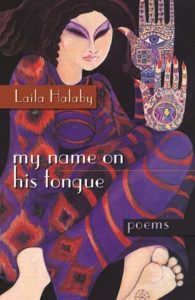 My Name on His Tongue, by Laila Halaby (Syracuse University Press)

Best-selling novelist and PEN Award winner Halaby presents readers with her first collection of poetry. Intensely personal and marked with a trenchant wit, these poems form a memoir following Halaby’s life as they explore the disorientation of exile, the challenge of navigating two cultures, and the struggle to shape her own creative identity. She shares the pain and confusion of growing up—the need for belonging and the solace of community—with tenderness and fearless candor. Rooted in her Middle Eastern heritage, these poems illuminate the Arab American experience over the last quarter century. Turning away from all that is esoteric and remote in American poetry today, Halaby’s lucid and forthright voice speaks to and for a large audience. 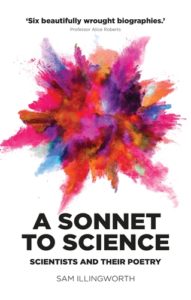 A Sonnet to Science: Scientists and Their Poetry, by Sam Illingworth (Manchester University Press)

A sonnet to science presents an account of six ground-breaking scientists who also wrote poetry, and the effect that this had on their lives and research. How was the universal computer inspired by Lord Byron? Why was the link between malaria and mosquitos first captured in the form of a poem? Who did Humphry Davy consider to be an ‘illiterate pirate’? Written by leading science communicator and scientific poet Dr Sam Illingworth, A sonnet to science presents an aspirational account of how these two disciplines can work together, and in so doing aims to inspire both current and future generations of scientists and poets that these worlds are not mutually exclusive, but rather complementary in nature.

Imperial Liquor is a chronicle of melancholy, a reaction to the monotony of racism. These poems concern loneliness, fear, fatigue, rage, and love; they hold fatherhood held against the vulnerability of the black male body, aging, and urban decay. Part remembrance, part swan song for the Compton, California of the 1980s, Johnson examines the limitations of romance to heal broken relationships or rebuild a broken city. Slow Jams, red-lit rooms, cheap liquor, like seduction and betrayal—what’s more American? This book tracks echoes, rides the residue of music “after the love is gone.”

Sometimes the most compelling landscapes are the ones where worlds collide: where a desert meets the sea, a civilization, no-man’s land. Here in Bonfire Opera, grief and Eros grapple in the same domain. A bullet-hole through the heart, a house full of ripe persimmons, a ghost in a garden. Coyotes cry out on the hill, and lovers find themselves kissing, “bee-stung, drunk” in the middle of road. Here, the dust is holy, as is the dark, unknown. These are poems that praise the impossible, wild world, finding beauty in its wake.

My Blue Piano, by Else Lasker-Schüler (Syracuse University Press)

Translated from the German by Brooks Haxton

The poems collected in this bilingual volume represent the full range of Lasker-Schüler’s work, from her earliest poems until her death. Haxton’s translation embraces the poems’ lyrical imagery, remaining faithful to the poet’s vision while also capturing the cadence and rhythms of the poetry. 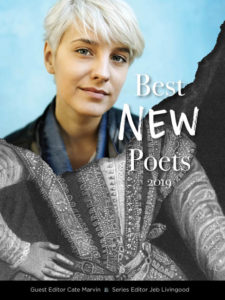 Entering its fifteenth year, Best New Poets has established itself as a crucial venue for rising poets and a valuable resource for poetry lovers. The only publication of its kind, this annual anthology is made up exclusively of work by writers who have not yet published a full-length book. The poems included in this eclectic sampling represent the best from the many that have been nominated by the country’s top literary magazines and writing programs, as well as some two thousand additional poems submitted through an open online competition. The work of the fifty writers represented here provides the best perspective available on the continuing vitality of poetry as it is being practiced today. 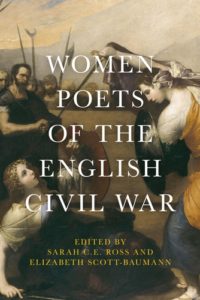 This anthology brings together extensive selections of poetry by the five most prolific and prominent women poets of the English Civil War period: Anne Bradstreet, Hester Pulter, Margaret Cavendish, Katherine Philips and Lucy Hutchinson. It presents these poems in modern-spelling, clear-text versions for classroom use, and for ready comparison to mainstream editions of male poets’ work. The anthology reveals the diversity of women’s poetry in the mid-seventeenth century, across political affiliations and forms of publication. Notes on the poems and an introduction explain the contexts of Civil War, religious conflict, and scientific and literary development. The anthology enables a more comprehensive understanding of seventeenth-century women’s poetic culture, both in its own right and in relation to prominent male poets such as Marvell, Milton and Dryden.

Poet Stephen James Smith’s sympathies lie with the addicted and the convicted, often responding to what he finds on life’s margins. His sharp-edged forceful language derives from his gifts as a performance poet and his fearlessness in looking into the eye of his subject matter. His poems get their charge, as well as their shape and substance, from his use of demotic rhythms, the vividness of his vernacular and his emotional directness. 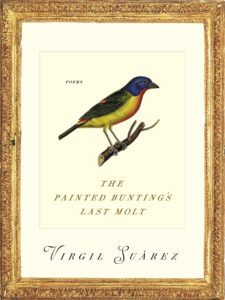 The Painted Bunting’s Last Molt explores fatherhood, parenting, and separation anxiety; and the ways in which time and memory are both a prison and a giver of joy. Fifteen years in the making, Virgil Suárez’s new collection uses his mother’s return to Cuba after 50 years of exile as a catalyst to muse on familial relationships, death, and the passing of time.