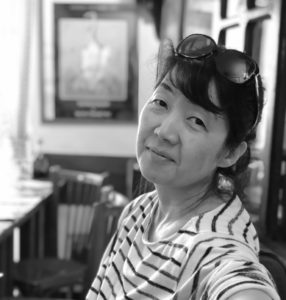 Caroline Kim of Walnut Creek, California is the 2020 winner of the Drue Heinz Literature Prize, one of the nation’s most prestigious awards for a book of short stories. Kim’s The Prince of Mournful Thoughts and Other Stories was selected by award-winning author Alexander Chee. The University of Pittsburgh Press will publish Kim’s collection this fall.

“The Prince of Mournful Thoughts and Other Stories is an extraordinary collection, and the title story alone is an astonishing feat, a fictional imagining of a haunting episode at court in medieval Korea, the problem of a prince who tries to murder his way out of his father’s unhappiness with him,” said Chee. “The collection takes us in stories across the Korean diaspora, from ancient Korea to the Korean War to Korean Americans living in America in the recent past, the present, and even the future. [Caroline Kim] has a devastating sense of dramatic timing, a keen ear for dialogue, and experiments constantly, with structure, minimalism, science fiction, historical fiction, returning always with insight, intelligence, and an expansive sense of their characters’ humanity, which in turn points us to our own. These characters will live in my head a long time.”

Whether they live in Seoul or Massachusetts, during the Korean War or in 1980’s America, Kim said her characters “find themselves uprooted from where they began, looking for the place that will feel like home. Language often acts as a barrier as characters try, fail, and momentarily succeed in connecting with each other.

“There are varied voices in this collection: a young woman at the cusp of the Korean War, a man about to become a grandfather for the first time, a girl who will never forget her first American friend, a royal scribe from the 18th century who tells the story of the tragic consequences of a King who could not love his son.”

The collection took nearly two decades to come together: “In my late twenties I realized that though I felt Korean to my core, I had no idea what that meant,” said Kim. “I wanted to read stories about what I felt was missing for myself: stories about Korea, what it was like in the past and during the war. I [also] yearned for stories where the POV came from a person like me: Korean, American, middle-aged, a mother, an immigrant, [and] an outsider. I took courses in the Korean language, visited Korea, read about its history and politics, as well as fiction translated into English, and watched countless hours of Korean historical dramas. Along the way, I wrote a story every few years. I did not think they would ever become a book. But to my surprise, they did.”

Kim was born in South Korea. She has an MFA in Poetry from the University of Michigan, where she won a Hopwood Award and an MA in Fiction from the University of Texas at Austin, where she was a James A. Michener Fellow. She was nominated by Jellyfish Review for a 2019 Best of the Net. She is currently a graduate student in Counseling at St. Mary’s College in Moraga, CA. Kim lives with her husband and three children.

In addition to publication by UPP, the Heinz award also includes a cash prize of $15,000. Drue Heinz, who passed away in 2018, created the endowment for this accolade in 1981.