A History of Pittsburgh’s North Side

A History of Pittsburgh’s North Side

Pittsburgh’s North Side has been in the news a lot lately. The community is trying to raise money to rebuild a historic fountain, renovate a landmark theater, and is marking the loss of a historic factory. Pittsburgh Steelers Chairman Dan Rooney and architectural historian Carol Peterson have written the definitive history of this neighborhood.

You’re invited to hear them discuss their book and get a signed copy.

Allegheny City: A History of Pittsburgh’s North Side 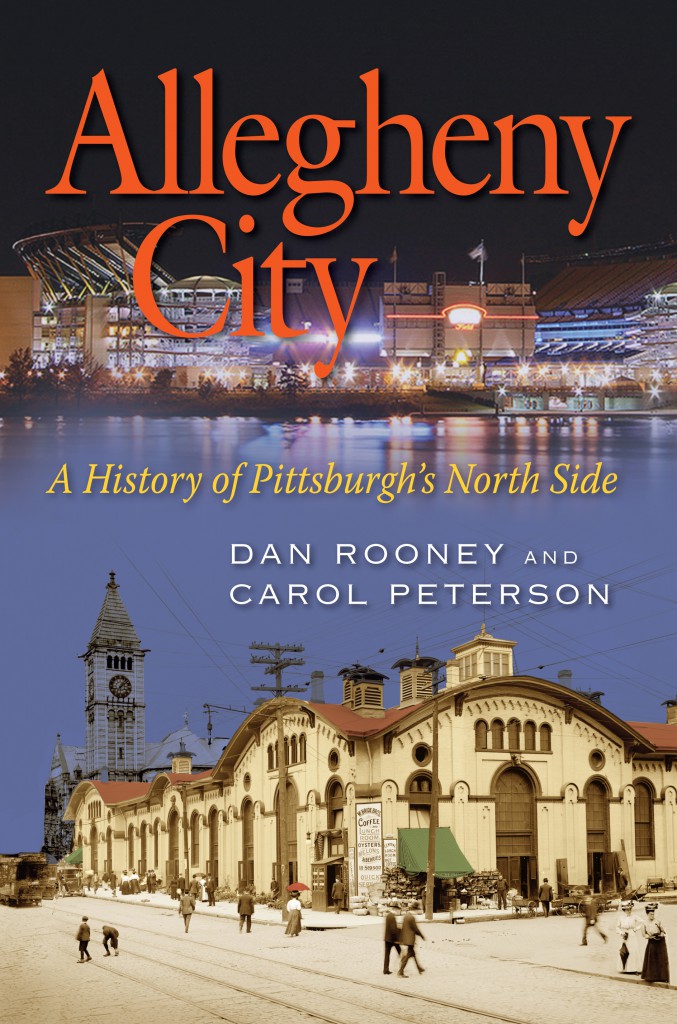 Allegheny City, known today as Pittsburgh’s North Side, was the third-largest city in Pennsylvania when it was controversially annexed by the City of Pittsburgh in 1907. Dan Rooney, a longtime North Side resident, joins local historian Carol Peterson in creating this highly engaging history of the cultural, industrial, and architectural achievements of Allegheny City from its humble beginnings until the present day. The authors cover the history of the city from its origins as a colonial outpost to its emergence alongside Pittsburgh as one of the most important industrial cities in the world. Supplemented by historic and contemporary photos, the authors take the reader on a fascinating and often surprising street-level tour of this colorful, vibrant, and proud place.

“This book is an invaluable reference tool for anyone interested in Pittsburgh. It is a serious, thoroughly researched history of the North Side with a wealth of fascinating detail. Architecture, land use, business trends, demographic shifts, and natural disasters all take their place in this sprawling history, mirroring trends in the larger American society. Dan Rooney’s afterword urges an optimistic approach, saying ‘we must all come together with a common purpose: to make the North Side a grand place to work and live.’ In our often-divided society, that’s a ringing cry for cooperation that should resonate with Pittsburghers who love their city.”—Meg Cheever, President and CEO, Pittsburgh Parks Conservancy

“Dan Rooney is a man of few words. When he speaks, it is best to listen. When he speaks about Pittsburgh’s North Side, listen carefully—there is much to be learned about the amazing history of Allegheny City and the evolution of an American community.”—Andrew E. Masich, President and CEO Senator John Heinz History Center, Pittsburgh

“The North Side is coming back. . . . This book tells the Allegheny City/North Side story from the days of canals and cotton mills through the present day. Dan Rooney, who grew up in the neighborhood, has joined with Carol Peterson, a tireless scholar of Pittsburgh’s history, to coauthor this essential story. . . . If you have any interest in the way American cities evolved—and if you have a particular interest in Pittsburgh—this is the book for its largest section, the North Side.”—Brian O’Neill, Pittsburgh Post-Gazette, from the foreword

“Dan Rooney and house historian Carol Peterson co-write a fine new history of the North Side. Some high points of this story are familiar, but this book invariably tells them with a welcome historical precision and humanistic nuance.”—Pittsburgh City Paper

“How many viewers of Monday Night Football featuring the Pittsburgh Steelers at Heinz Field realize that the stadium—like nearby PNC Park, the Pittsburgh Science Center, and the Warhol Museum—sits on Pittsburgh’s North Side, once a thriving Allegheny City? Lest we forget, two North Side authors—Steelers owner Dan Rooney and architectural historian Carol Peterson—have filled the void in a volume that is both intimate and informative. . . . As a joyful paean to a once-important and thriving industrial city that still retains a prideful sense of place, the book fully succeeds in its purpose.”—Pennsylvania Magazine of History and Biography

“Takes readers on a fascinating and often surprising street-level tour of this vibrant, colorful and proud place.”—Pennsylvania Heritage

“Valuable for readers interested in western Pennsylvania history and in the nature of our state’s most important industrial city.”—Pennsylvania Magazine