Q & A with Poet Lynn Emanuel

Q & A with Poet Lynn Emanuel

Lynn Emanuel is celebrating the fall publication of her new volume, The Nerve of It: Poems New and Selected. We sat down together to learn more about her life and writing process. 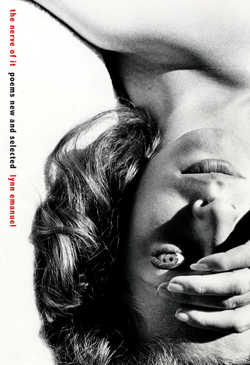 UPP: Do you remember writing your first poem? How old were you and what was it about?

LE: I don’t remember my first poem, although I do remember a line from an early poem. It was about a distant church’s sharp steeple looking like a needle pricking the sky’s blue cloth! I’m not sure what age I was—young enough to be surprised by praise, old enough to be embarrassed by it. I had been in my room writing when my aunt came to visit and my mother insisted that I show her my poem. My aunt told me how beautiful the image was. Even though I was young, I had a sense that this was not the praise I wanted. I wanted the image to be startling, or apt, or striking—all words I couldn’t have said to myself. To me, calling it beautiful sounded condescending or dismissive. It was a feminine word, a word applied to girls (my aunt was a well-known fashion model). Looking back, for someone who was young, it’s not a bad image.

UPP: Poets often say they feel they are never really “done” with a poem. For The Nerve of It, as you reviewed poems from other collections for this new book, did you have to fight an urge to change poems that have been published?

LE: I didn’t have to fight the urge to change poems. I gave into it. Some of my friends, when working on a new and selected, performed wholesale revision of their poetry. I didn’t do that; I didn’t revise, I edited. What surprised and interested me was the way I made my decisions about what to edit: I blue penciled any lines that I felt, when I had read the poems publicly, went on too long. Yet another image. A second example. A further qualification. I wrote and posted above my desk a line from the Seinfeld TV show: Yadda, yadda, yadda. Whenever I remembered reading a poem aloud and going to myself yadda, yadda, yadda, I took that part out.

UPP: We really enjoyed “The Politics of Narrative: Why I Am a Poet.” Can you briefly summarize the sentiments you expressed there?

LE: Well, I can’t really summarize or paraphrase the piece, but I can speak to the events that led to it. I wrote it shortly after my second book was published, and I was on the road a lot. I think I gave two to three readings a month for a year.   I was numb from self-promotion and probably exhausted and irritable as well. In any case, it hit me pretty forcefully that–when there was a q and a after a reading, or a series of questions in a class I visited–the questions almost always had to do with the backstory of the poems. Audiences wanted to know what really happened, or what was I really feeling when I wrote the poem, or why did I really write it. They were interested in the poem as an occasion that could lead to an explanation of some kind, which, as I stood before them and talked, happened in prose. I started to be vexed at this desire for the expository. It was out of that vexation and exasperation that I wrote “The Politics of Narrative “. . . in prose.

UPP: What other genres do you enjoy reading and why?

LE: Right now I’m reading a series of single-authored critical works about poetry, most recently a book entitled Lyric Shame by Gillian White, recently published by Harvard University Press. I’m stressing single-authored works because I have grown weary of anthologies of essays by poets, compiled by poets, having to do with contemporary poetry. I’ve grown weary of that kind of collage. Instead, I find myself longing for volumes in which a writer single-mindedly travels through and grapples with an idea.

UPP: You were a judge for the National Book Award. Please describe that experience.

LE: It was a carnival of voices: the voices in the books and the voices in the room. It was fun, a privilege, really, and, as an added benefit, for one whole year I was totally caught up on my reading. One of the aspects of this kind of massive judging was that I constantly felt I was required to examine my assumptions. There were days when I felt I was overhearing a great democracy of expression and there were other days when I felt contemporary American poetry was governed by two or three miserly and contentious modes of expression. At the moment I was examining my own poetic and critical assumptions, they kept changing. I found myself trying, alternately, to be generous and open minded, and, at another moment, to be stringently persnickety. I felt like that sailor on deck in a great storm. The judging was an emotional and personal experience in ways I never could have imagined. I was somewhat chastened at the end of it. Nevertheless, while all this might sound chaotic, we did, in fact, pick a very good book for the award.