“Rome”: An Excerpt from Now You Know It All

“Rome”: An Excerpt from Now You Know It All 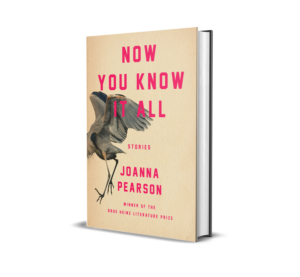 The winner of this year’s Drue Heinz Literature Prize, Now You Know It All by Joanna Pearson, is a masterful act of storytelling. Poised on the precipice of mystery and longing, each character in Now You Know It All also hovers on the brink of discovery—and decision. Set in small-town North Carolina, or featuring eager Southerners venturing afar, these stories capture the crucial moment of irrevocable change. A young waitress accepts an offer from a beguiling stranger; a troubled boy attempts to unleash the villain from an internet hoax on his party guests; a smitten student finds more than she bargained for in her favorite teacher’s attic; two adult sisters reconvene to uncover a family secret hidden in plain sight. With a sharp eye for rendering inner life, Joanna Pearson has a knack for creating both compassion and a looming sense of threat. Her stories peel back the layers of the narratives we tell ourselves in an attempt to understand the world, revealing that the ghosts haunting us are often the very shadows that we cast.

There  were  ruins  and  fountains  and  a  fury  of  beeping horns. Naked putti lounging fatly in marble. Gorgeous, long-armed women in skirts and strappy sandals, and young men leaning out of their cars in mirrored sunglasses. Old men in storefronts arranged cheeses and sau-sages tenderly, as if tucking in sleeping infants, while chattering tour groups trailed guides holding red umbrellas, and honeymooners licked perfect gelatos. There were long, hushed halls filled with onlookers crowding around famous paintings: Jesus flanked by apostles, emperors crowned with laurel, mythical women in half-dress being chased by centaurs. There were church-es in which frescoes glowed in dim magnificence above altars. Gold coffered ceilings. Pietàs. Aqueducts. Domes.

In the catacombs, we followed a man with a bowtie and a stutter who told us of the city, its slaves and rulers, while the bones around us listened in untroubled silence. We’d seen so much beauty by then we’d been rendered insensate to it, like gorging on sweets to the point of sickness, or until one tastes nothing at all. Our eyes could not absorb one more basilica. We were tired and dust-covered, our shoulders sunburned. We were sick of each other and sick of washing our underwear in sinks. We were finally seeing all the things—beautiful, famous things we’d waited all our young lives to see—but we couldn’t appreciate any of it any longer.

“Please don’t talk to me,” I said to Paul in the hostel’s small kitchen while a troop of merry Australians cracked open beers nearby. Friendships formed quickly here, and yet somehow Paul and I had managed to remain alone. We were pinched and irritable-looking, clutching our respective Lonely Planets like shields. We must have resembled a couple even though we hated each other. Maybe this even made our coupledom appear more authentic.

The trip had seemed a good idea at first, but now even the sight of Paul—his socks, the sound of his breathing, the way he chewed—repulsed me. It was like a horrible stranger had assumed Paul’s shape, donning his body like a cheap suit. Everything about him I’d once found pleasant or appealing had been twisted into cruel caricature.

And yet here we were, with a coveted semiprivate room in the middle of July, the height of tourist season. Travelers from all over the world crowded outside the gates of the hostel each evening, waiting to see if one of the dorm beds might open up. Every hostel in the city was full to capacity, and late-arriving backpackers found themselves having to pay for low-end hotels, or, more bravely, sleeping in parks with new friends made on nights out. We had reserved in advance, following a travel itinerary plotted by Paul, who preferred to leave nothing to chance. It was just the two of us, and one silent girl from Japan who rolled her nightshirt neatly, tucking it under her pillow in the morning. How could we give this up? Rome, of all places. City of Seven Hills. We were bound together, Paul and I, by our good luck, by our reticence with others.

Our first night there, while the other backpackers were still out exploring the nightlife, sharing wine at little outdoor tables in the piazzas, falling in love, Paul and I read silently in our room. Even the quiet Japanese girl did not return before the curfew. I listened to Paul whispering to himself before he went to sleep, and I knew he was reciting words to stave off disaster, a godless prayer. When I’d first met him, I’d found this ritual endearing. It had given him a certain pathos. Now, of course, it was but one of the many things about him I hated—almost as much as he made me hate myself.

So I went on a day trip without him.