Today for University Press Week, we’re interviewing Ramona Reeves, whose debut story collection, It Falls Gently All Around and Other Stories, won the Drue Heinz Prize for Literature. Below she talks about being a first-time author with a university press. 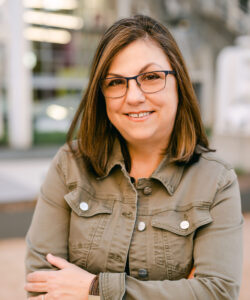 Q: Tell us a bit about your background and how you became a writer

A: I’ve been writing since I was eight or nine. Until I was twelve, I grew up with my mom, grandmother, and great-grandmother. I also was the only child in my house and grew up around a lot of adults. In that environment, I frequently needed to entertain myself and learned to love reading, writing, and making up stories.

Q: Tell us about the book you recently published with us. What’s it about, and what do you hope people will take away from it?

A: My interconnected story collection, It Falls Gently All Around and Other Stories, centers on two characters, Babbie and Donnie, who live on the fringes of society. But the book also includes stories from other characters who orbit Babbie and Donnie’s lives. Some of those characters are affluent insiders, people seen as respectable. I wanted to explore class and the idea of belonging versus fitting in with this book. I think reading fiction develops empathy muscles; I know writing stories does that for me. I hope readers will walk away feeling about more empathetic about the characters or perhaps take away a new perspective related to a particular story. I hope first and foremost readers will enjoy reading the book and being introduced to the world it offers.

Q: What was your impression of university presses in general and UPP in particular prior to working with us?

Q: What was the publication process like? Did it go according to your expectations, or were there any surprises or memorable incidents?

A: I thought the publication process went smoothly. This was my first book, which meant each step in the process was new to me. Because of that, I didn’t have many expectations, other than believing the manuscript would eventually arrive at a place where it was edited and ready to be printed.

Q: Did you encounter any problems along the way?  If so, how did you work together with UPP staff to resolve them?

A: I wasn’t sure about the cover initially, which is strange to say now because I love the cover so much. In retrospect, I had my own ideas about the cover coming into the process, and when I saw a rendering that was different than anything I’d imagined, I needed to adjust and see the cover through the designer’s eyes. The UPP production director assured me that the press believed the cover was the right one for the book. He and the designer did decide to change the color of my name on the book, which was a small but good change, I think. I’m very glad I trusted the production director and designer. I’ve received many positive comments about the cover. My advice is to let the people who know about such things do what they do best.

Q: Do you have any fun anecdotes you’d like to share from bringing your book into the world?

A: My second event after the book was published took place at a bookstore in the Mobile, Alabama area, where the stories are set. I didn’t expect a huge turnout, but ended up selling out of the books the store had in stock. My mother was in attendance and had purchased a copy there. She ended up getting a refund, so someone else could buy that copy. I was tempted to give away my reader’s copy, too, until I realized I’d practiced signing my name inside it because another writer suggested coming up with a signature different from the one I used for my bank signature. Anyway, I was then too embarrassed to give it away. (And yes, my mother bought another copy a few weeks later.) But if anyone wants to see my name scribbled fifteen different ways, it’s all there in my reader’s copy.

Ramona Reeves grew up in Alabama. She has won the Nancy D. Hargrove Editors’ Prize and been an A Room of Her Own fellow and a resident at the Kimmel Nelson Harding Center for the Arts. Her writing has appeared in the Southampton Review, New South, Bayou Magazine, Texas Highways, and others.