from the new biography Chuck Noll: His Life’s Work

To be published by University of Pittsburgh Press October 28, 2016 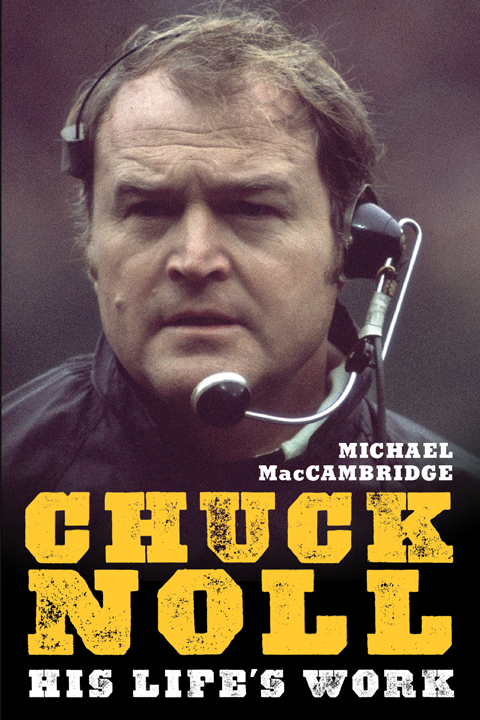 Chuck Noll won four Super Bowls and presided over one of the greatest football dynasties in history, the Pittsburgh Steelers of the 1970s. But Noll was an intensely private man, never revealing much of himself, not even to the players and fans that revered him. For the first time, Chuck Noll: His Life’s Work by national sports writer Michael MacCambridge tells the compelling human story of the legendary Steelers coach. MacCambridge traces Noll’s journey from a Depression-era childhood in Cleveland, where he first played the game in a fully integrated neighborhood league led by an African American coach, to his serious pursuit of the sport through high school and college. Eventually, Noll played both defensive and offensive positions professionally for the Cleveland Browns, before discovering that his true calling was coaching. Readers will discover the man behind this Hall of Fame legend, his triumphs and travails. Coming October 28, Chuck Noll: His Life’s Work.

Chuck Noll grew up in a lower income neighborhood on the East Side of Cleveland. Much like Pittsburgh, it was a city built on heavy industry and union labor. Remembering his upbringing later in life he said, “That was the best thing that could have happened to me. You knew if you wanted something you’d have to get it yourself. No one was going to give it to you. You became a realist very early in life.” Also early in life, Charles Henry Noll made it known that he wanted to be called Chuck. “Don’t call me Charlie,” he said, “that’s the name of a horse!”

In 1942, at the age of 10, Chuck Noll joined a racially integrated neighborhood football team called the Clippers which had an African American coach. His early experiences growing up in an ethnically and racially diverse neighborhood in Cleveland would remain with him his entire life. Noll learned to judge people by their character, talent, and work ethic.

By the ninth grade, Noll was already focused on his future and his education. He wanted to attend Benedictine High School, a private Catholic school in Cleveland. But the tuition was $125 a year, and his family could not afford it. Working as a paperboy, golf caddy, pinsetter in a bowling alley, and gravedigger, Noll earned his own tuition money. By his sophomore year, he had enough extra time to try out for the football team. Noll made the varsity squad as a fullback.

During his junior year of high school, while sitting in a math class, Chuck Noll began to quiver, then fell to the floor, shaking violently. He was later diagnosed with epilepsy. The young man did his best to hide or ignore the condition. Even with his extra work to pay the tuition for Benedictine High, there were weeks when the family couldn’t afford the medicine to prevent the seizures. Sometimes Noll would take his medicine just every other day. But eventually, the seizures would recur.

Like many high school players of his day, Noll dreamed of playing college football at Notre Dame under legendary coach Frank Leahy. Although he didn’t receive a scholarship, he was offered a tryout. Several of the practices went well, and Noll held his own. But he purposely went off his epilepsy medicine because it made him sluggish. Noll had a minor seizure during practice and ended up on his back. He was quickly cut from the team. Not one to give up, he transferred to the University of Dayton, Ohio, where he made their team as an offensive lineman. He earned a scholarship, as well as the nickname “the Pope,” because Noll’s friends said he thought he was always right (and he usually was).

Chuck Noll was drafted 239th overall in the twentieth round of the 1953 draft by the Cleveland Browns. Dayton college coach Joe Gavin had recommended him as the type of “brainy” player that Browns Coach Paul Brown favored. Noll had graduated with a degree in secondary education. For those who made the team, the standard rookie contract was $5,000 a year. Although a long shot, Noll opted to try out. He went on to play both offense (guard) and defense (linebacker) for the Browns. During his offseason, he worked as both a substitute teacher and insurance broker to supplement his income. He retired in 1959 to pursue a coaching career.

Even those closest to Chuck Noll felt that his wife Marianne was the only person who truly knew him. Noll’s life—and his life’s work—makes the most sense as a love story. Noll and Marianne Hanes were deemed a good match by Marianne’s friend and roommate Marilyn Hall, who introduced them to each other. Marianne turned him down the first time he asked for a date, but about a month later she had a change of heart. From that time on, the two became inseparable. Maybe it was a coincidence, and maybe it wasn’t. But from that time on, Noll never suffered another epileptic seizure.

The physical battering and bruising Chuck Noll suffered as a pro football player made him realize he didn’t want to play the game for very long. He thought long and hard to discover his life’s work. During his 1959 off-season with the Browns, Noll even considered becoming a doctor. An interview for a job as a coach at his alma mater, the University of Dayton, made him realize that what he really wanted to do was coach.

Noll’s first professional coaching job was as a defensive assistant for the then AFL Los Angeles Chargers. What he learned from watching head coach Sid Gillman was a methodology that allowed for a more granular dissection of the game and a deeper understanding of how the elements related. In 1966, Noll moved back to the NFL as an assistant coach for Don Shula and the Baltimore Colts. Noll’s success in Baltimore earned him notice around the NFL as a potential head coach. In 1969, after being turned down by Penn State’s Joe Paterno, Dan Rooney of the Pittsburgh Steelers placed a call to Noll. The day after Noll’s two-hour interview with Rooney in January 1969, the Steelers offered Noll the head coaching job. He would become their fourth coach in six years.

In 1969, during Chuck Noll‘s first year with the Steelers, in addition to the team being one of the worst in the league for decades, the Steelers also had the worst facilities in football. For another year, until Three Rivers Stadium opened, they would play their games at Pitt Stadium, with offices at the rundown Roosevelt Hotel, and practices held at South Park. Noll would later tell his wife Marianne, “We have a very bad football team. It’s going to be a long season. Just be prepared.”

Former players have vivid memories of Noll’s first summer training camp. As Hall of Famer Joe Greene recalled, Noll’s speeches to the team during the evenings at Bonaventure Hall were not long, but they were very clear. One night, he explained to the club that “our ultimate goal is simple: to win the Super Bowl.” From the back of the room, the third-year running back Don Shy let forth with an audible laugh. “I remember Don Shy laughing,” Greene said. “And I also remember, a couple of days later, Don Shy was gone.” He had been traded to New Orleans, for a player and two draft choices. Andy Russell, the veteran All-Pro linebacker was also impressed by Noll’s no-nonsense style. “I’d had good coaching, but I’d never seen anyone like Chuck,” he said.

While at the University of Dayton, Chuck Noll lived across the hall from a Hawaiian student named Jimmy Akau and his roommate Pat Bennington. The two were often heard playing Akau’s ukulele. Soon Noll was spending his free time sitting with Akau, learning how to play simple chords on the instrument. By the end of the semester, Noll had mastered several songs. Years later, several Pittsburgh Steelers paying a Christmas visit to the Noll home in Upper St. Clair were surprisingly entertained by Noll’s ukulele talents!

Chuck Noll was a true renaissance man and retained varied interests throughout his life. For example, he converted a closet in their home into a darkroom, fascinated by technique as well as equipment. He enjoyed taking pictures of nature and wildlife. A few weeks after one of the Steelers’ Super Bowl victories, Noll bought and learned to fly his own plane, a Beechcraft Bonanza. And Noll became a connoisseur of wine, so much so that by the late 1970s he would start making his own version of dandelion wine.

Chuck Noll always remembered that Paul Brown, coach of the Cleveland Browns, admonished his players to find their “life’s work” after football. At the age of 27, after a myriad of jobs, from digging graves to substitute teaching, from selling insurance to playing football, and considering careers in law and medicine, Noll found his “life’s work,” as a football coach. And, decades later, when the time came for Noll to tell the Steelers he was retiring, he was quoted as saying, “I think it’s time for me to get on with my life’s work.”