Brigitte Le Normand, author of Designing Tito’s Capital: Urban Planning, Modernism, and Socialism in Belgrade, shares some of her favorite places in the former Yugoslavia. Brigitte offers a vast array of locations, from a hotel where one can relax over coffee and pastry, to an outdoor market!

Having studied the history of Yugoslavia for more than a decade, I’ve had the fortune to travel extensively in this beautiful region, primarily in Croatia, Serbia and Bosnia Hercegovina. I occasionally get requests for travel recommendations, which led me to reflect on my most memorable experiences. I present them to you here, with the caveat that I have surely overlooked many worthwhile places. In fact, please do add to this list with your own favorites, via the comments section. This list reflects my personal experiences and biases – but isn’t that what makes it interesting?

Some may wonder why there is no “best Adriatic island”, “most beautiful countryside,” or “best restaurant” category – I puzzled over these, and ultimately, decided that there were too many contenders for these categories to be meaningful. Perhaps your best bet is to follow my lead, and discover a new island or region every time you visit, and ask the locals for restaurant recommendations. These omissions also remind us of the drawback of such a list – ultimately, every place has its local character, and to get the most out of your visit, you should take the time to imbibe the unique qualities and people of the places you visit.

Coming from a historian of socialist Yugoslavia, this choice is perhaps not surprising. The main building, designed by Mika Janković, is a vibrant example of the Modernist architecture embraced by the Titoist regime following its break with Stalin’s Soviet Union. It was formerly known as the Museum of the 25th of May, a holiday designated to celebrate Tito and youth. Young people would run an annual relay race through the country to celebrate this holiday, and the museum preserves a collection of these batons. It also holds a variety of temporary exhibitions that seek to shed light on the history of socialist Yugoslavia. Tito, a ruthless and brilliant figure who divides even historians, is interred in the “House of Flowers” in the museum complex.

Ivan Mestrović is one of the most beloved Croatian artists, also known for his contributions to American art, as a result of his emigration to Chicago. What is less publicized today is his role in promoting a Yugoslav identity through his art work during the Kingdom of Yugoslavia. His magnificient estate, donated to Croatia in 1952, contains a number of his remarkable sculptures and has a spectacular view on the Adriatic.

Separated from the busy Adriatic coast by a mountain chain, the town of Imotski is definitely off the beaten path, and not particularly geared to tourism. (Don’t be fooled – many of its inhabitants are in fact well traveled. During the socialist period, like many other isolated agricultural regions, it was completely neglected by the Yugoslav state, with the consequence that most of its young men became migrant workers in Western Europe – the subject of my forthcoming book.) On the outskirts of the town is a spectacular sinkhole known as the Red Lake, whose total known depth is 530 meters, which apparently makes it the third largest sinkhole in the world. In the summer, locals zig-zag their way down from the tall cliffs and use it as a watering hole. It is particularly fun to watch young people diving from rocks jutting out of the cliffs.

The Hotel Moskva is one of the most iconic buildings in Belgrade. Covered in beige and emerald glazed tiles, the hotel was built on the Terazije in 1908 by Russian investors and developed a prestigious reputation, both as accommodation for international celebrities, and as a meeting place for intellectuals. As you sip on your coffee and savour your Moskva šnita, try to imagine a group of young artists belonging to Grupa Umetnika circle excitedly arguing about the state of Serbian culture in the 1920s, or nobel-prize winner Ivo Andrić sipping on his coffee. 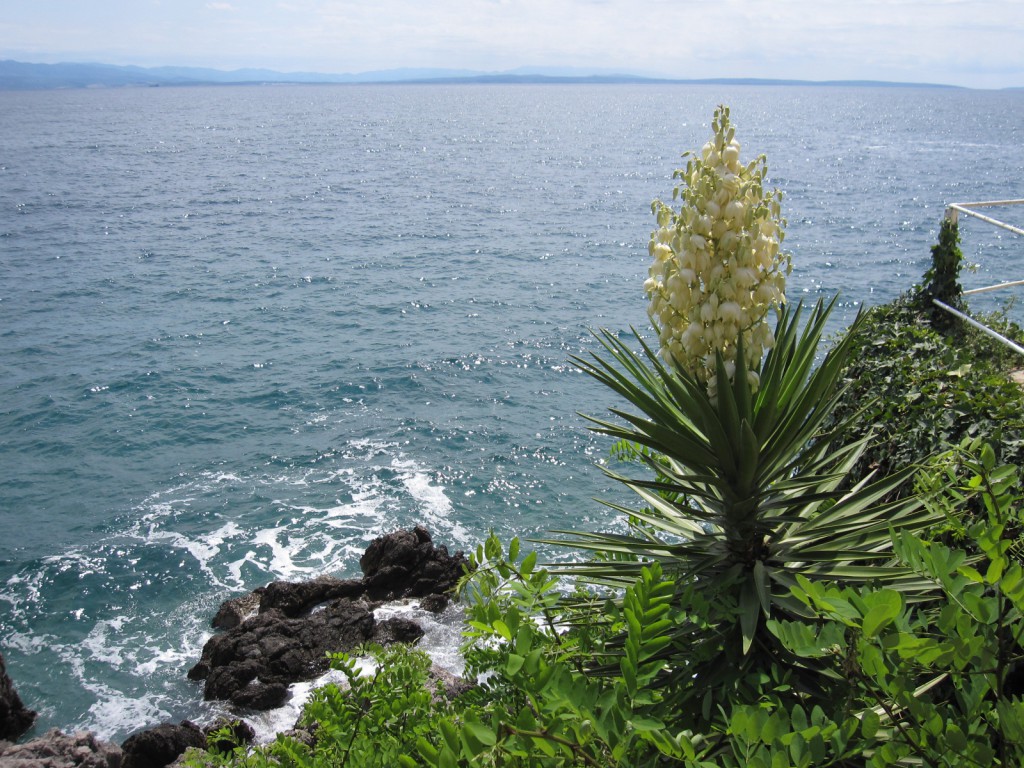 A popular Habsburg spa resort in the 19th century, Opatija has retained much of its aristocratic charm. This is a great place to wind down at the end of an ambitious vacation. You can walk along the seashore for several kilometers, stopping along the way to climb down a staircase and enjoy a brisk swim, or else climb up a staircase and enjoy a beer or coffee, depending on your seaside personality.

Honorable mentions: Ljubljana and Belgrade are not seaside towns, but they are both bisected by rivers and have wonderful riverside promenades. The Ljubljanica is a narrow river and so has the character of an urban feature rather than a dividing one. I highly recommend sitting at one of the riverside bars in the evening and sipping a glass of excellent Slovenian wine by candle-light. Belgrade is at the confluence of two majestic rivers, the Sava and the Danube. You will gain insight into the popularity of the modernist residential neighborhood of New Belgrade if you spend an afternoon strolling (or roller-blading, or cycling) along the Danube. If you want to learn more about the history of New Belgrade, take my book along and read it while enjoying a coffee in one of the raft cafés, or splavovi.

There are many impressive archeological marvels in the former Yugoslavia, and so I am bound to have a lot of detractors here – why not Dubrovnik, jewel of the Adriatic? Or the Pula Roman amphitheater? Or the Kalemegdan fortress in Belgrade? It comes down to this: the palace is the ultimate case study in the re-use of the built environment through the centuries. After the fall of the Roman Empire, people transformed parts of the palace into apartments. Diocletian’s own mausoleum was converted into a church. The basement of the palace was used as a refuse depot, which as you can imagine, is today a rich source of information on everyday life in the middle ages. What could be a better illustration of the persistence of the past into the present? 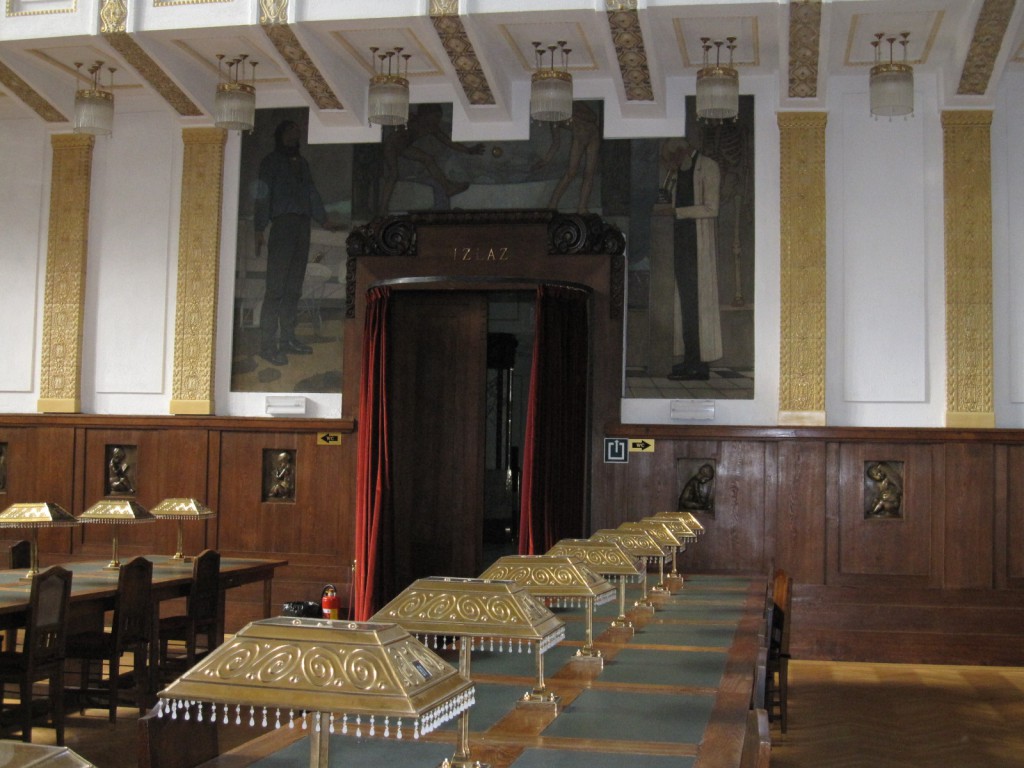 I spent a summer here, after many years of research in other archives. Upon entering the reading room, I had to catch my breath – finally, here was an inspiring space to work in! Built in 1913 in the Croatian Secession style, the reading room was formerly the University Library. It boasts dramatic ceilings, warm wood paneling, stunning frescos and stained glass, and beautiful ornamentation.

While tourists have been flocking for years to nearby Dubrovnik, the turmoil of the Milosevic years conspired to keep Kotor out of the public eye. When I visited it a decade ago, it was not easy to get to – I had to take a bus down the Adriatic coast, disembark at the border, and cross your fingers you could find a taxi to get to Kotor. In addition, no running water was available during the day due to a shortage. (I suspect the times have changed in the meanwhile; I hear it is a popular destination for cruise ships.) In spite of these inconveniences, Kotor did not disappoint. Like Dubrovnik, it is a walled city, but while Dubrovnik was successful in maintaining its status as a city state, Kotor eventually came under the control of the Venetian Empire, and it is this period that gave the city its characteristic architecture. 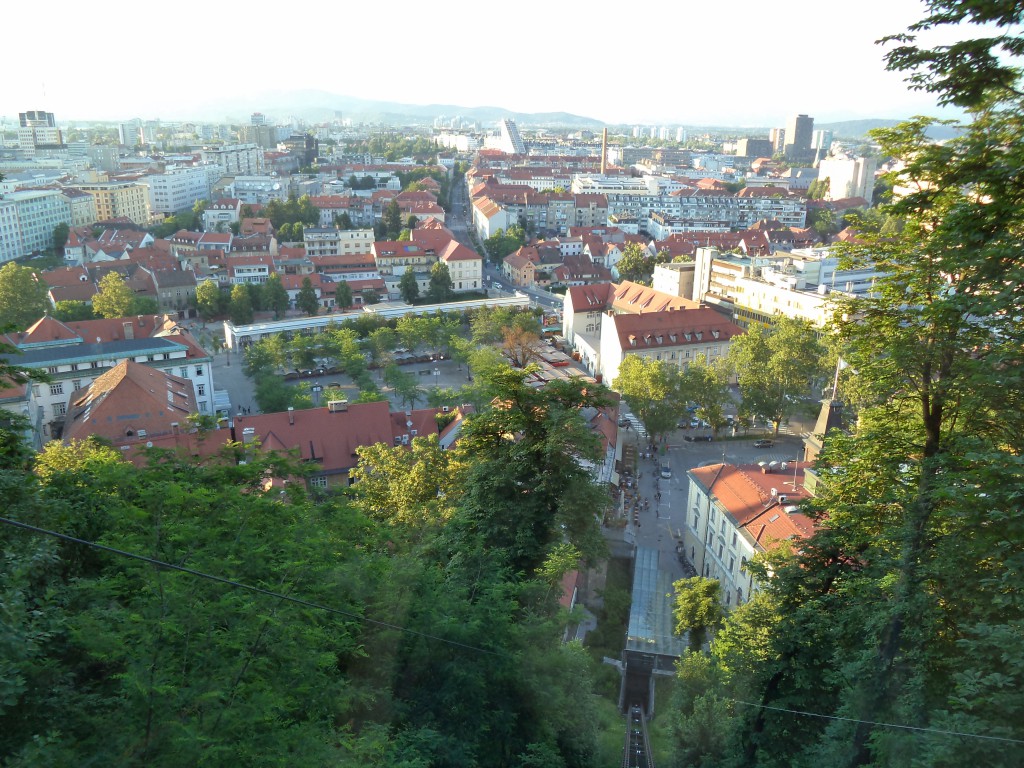 The cities of former Yugoslavia all have wonderful markets, featuring an abundance of tasty and affordable fruits, vegetables and local cheeses and meats. Two things set this market apart in my mind. First is the elegant backdrop, on one side, of the castle district, and on the other, of Jože Plečnik’s market hall, bordering the Ljubljanica. The second –and let me engage in a bit of harmless stereotyping here – displays Slovenian ingenuity: vending machines dedicated to selling local artisanal foods. Even if, overcome by jet-lag, you miss the market’s opening hours, you can still get your fix of local raw milk and cheeses!

Every time I go to Dubrovnik (which is unfortunately not frequently now that I have three children), I try to visit this bar at a few different times of day. It is perched on the city walls, with a 180 degree view of the Adriatic – a perfect spot from which to take in the changing light of the day and of the sea. In my day, they used to serve their drinks in plastic cups, which might seem crass, but only completed the feeling of ephemerity.

City most steeped in cultures and history: Sarajevo, Bosnia Herzegovina

While I’m sure many would take issue with this, to me, one of the key themes of Yugoslav history is the co-existence – sometimes peaceful, other times volatile – of different cultures sharing common places. A number of cities exemplify this – most famously, and tragically as well, the city of Sarajevo, whose Serbian, Croatian and Bosniak communities inscribed their presence in the many places of worship, libraries, schools, public places, and residential and commercial neighborhoods in the city. It can also be tasted in its numerous restaurants and pastry shops (for the record, I am not a fan of Bosnian baklava, which is far too syrupy for my liking.) If you feel the need to engage in some sobering reflection on the tragedy of the 1990s, you can visit the Olympic stadium. This symbol of friendly international competition and sportsmanship was turned into a war cemetery less than a decade after it was built.

Honorable Mention: Another, lesser known example, is the city of Rijeka. It has often been said that it belonged to four different states in the course of the 20th century: the Habsburg Empire, Italy, socialist Yugoslavia, and Croatia. Some also see it as the birthplace of Italian fascism. Poet Gabriele D’Annunzio seized the city at the end of the First World War, claiming it as inalienable Italian territory. Mussolini would later copy D’Annunzio’s rhetoric and style. Beyond its Italian and Croatian heritage and communities, the city proudly boasts a number of minorities, including Serbs, Slovenes and Bosniaks. The city is less easy to “read” than Sarajevo, in part because it has been less scripted. This is one of the motivations for my new project, Cities and Regions in Transition – the case of Rijeka/Fiume, which will map how the city changed when it shifted from Italian to Yugoslav control at the end of the Second World War. Stay tuned!

Brigitte Le Normand is an Assistant Professor of History at the University of British Columbia Okanagan. Her first monograph, Designing Tito’s Capital: Urban Planning, Modernism, and Socialism, was published by the University of Pittsburgh Press in 2014. She is currently working on a project on Socialist Yugoslavia’s labour migrants, and has just begun a project on the transition of the city of Rijeka/Fiume from Italian to Yugoslav control after the Second World War.